“ The jester is brother to the sage”- Arthur Koestler

“Wicked problems” as defined by Horst Rittel in his pivotal text Dilemmas in a general theory of planning (1973), to this date provides a significant mode of rethinking questions of complexity in architecture. Recent interest in alternative instruments to frame complexity due to various forms of crisis (environmental, economic, refugee, etc.) and the resulting discussions on new instrumentalities or more specifically what John Law (2004) identifies as after method (ways of dealing with mess) opens the need to rethink the discourse on research methods and their relation to wicked problems in architecture. Although Rittel’s original paper has led to research projects in many fields such as sociology, organizational learning, information theory, software design, product design etc., apart from a small number of researchers such as Champory Rith and Hugh Dubberly (2007) there is very little direct discussion on wicked problems in architecture. In addition, while most people identify Rittel’s work in the context of information theory, information systems, conversation theory they pay less attention to the broader systemic component and humanities related aspects of his work. In this paper I will discuss a studio experiment with a device called “Fun machines” as a method of rethinking wicked problems in relation to architecture.

Systems which are identified in the context of the studio as fun machines are in fact carefully constructed timely architectural devices as a reaction to cultural agitants in forms of multiple crisis in the spheres of labor, migration flows, housing, environmental, educational. Whilst Rittel’s discussion on the nature of wicked problems is at the crux of the theoretical framework, in addition it engages with two other types of discourses to formulate a theoretical framework. Firstly it engages with the “ non- trivial machine” as identified broadly by the second generation of systems theorists (Heinz von Foerster, Gordon Pask) and the systemic notions of “information” and “heuristics” that the second-order systems framework engenders. The studio also draws on 1960/70s appropriations of these concepts within architecture by systems practitioners such as Archigram and Cedric price. Secondly, it engages with the philosophical discourse on humor as identified in the work of Sigmund Freud (humor and the unconscious), Henri Bergson (humor and the social), Gilles Deleuze (the connection between sense and nonsense), and Arthur Koestler (bis-association and the techniques of humor in problem framing).

Drawing on the aforementioned theoretical framework the pilot studio focused on wicked problems in the context of East Germany more specifically Dessau and the surrounding socio-political and environmental contexts. The wicked problems chosen by the students were transferable across other East German cities. The problems of migration, Germany’s efforts to balance these migration trends with the push of refugees towards the East, the lack of proper jobs and social infrastructural systems in, the disconnection between educational sites such as the University of Applied sciences in the former Bauhaus compound and the wider context of the city, the attitude towards outsiders or migrants, media and education systems in the GDR period and there contemporary effects, were chosen as starting points to their investigations. The resulting heuristics of the fun machines and their representations in the form of a comic strip has four specific features themes in relation to some of the core concerns laid out in Rittel’s 1971 paper.

The fun machine as a device facilitates the non-taming of the wicked problems. It exposes the multiple feedback loops of complexity in these problems and allows the architect to reframe these processes in a recursive manner. For Rittel wicked problems were another way of rethinking the discussion on the significance of instrumental knowledge in architecture. Particularly instrumental knowledge as something that does not deal with “what is” (science) and “what it means” (humanities) but rather as something that relates to “ what matters” (pragmatics). Fun machines create mattering maps.
Paradox or contradictions are significant components of wicked problems. When converted to a tame problem, these contradictions are reduced to simple problem statements. Using Koestler’s notion of “bis-association” the fun machine utilizes paradoxes as a productive factor in the generation of the machine. Discordant codes, hidden incongruities are made explicit. According to Rittel design emerges through conflict and controversy. The fun machine is a conflict/ controversy map.
The fun machine plays with language. According to Rittel wicked problems need to be reframed constantly. The fun machine utilizes word play in its many forms ( pun, witticism, perversions of rhythm and rhyme to engage in re-languaging of the identified problem.
The fun machine allows for a Clowning of the self and the construction of alter egos. It operates as a tool for designers to rethink their own subject position and agency. This idea of clowning allows one architect to assume multiple voices at the same time and voice the contradictory positions within the designing self. This method of not taking yourself seriously allows for other voices and criticisms that are part of the design framework to become apparent.
More specifically the project is part of a broader research and education experiment on rethinking the encounters between architecture, systems theory and wicked problems. It is an attempt to reframe ways of teaching Rittel’s concept of wicked problem and its relevance to contemporary discussions on research methods in architecture. The fun machine is not only a device to rethink how wicked problems are framed through humor but also remain as a way of introducing the concept and discourses of systemics to graduate students of architecture as a core discourse in there academic program or design studio education. In the presentation I will flesh out the discussion developed in 3 earlier paragraphs as 3 sections with special reference to the pilot studio project (including the drawbacks). It is hope that this will generate a broader conversation on ways of developing the project further. In a complex world where wicked problems become an inevitable part of the everyday life of an architect it is hoped that the fun machines will provide young architects with a tool for thought, action, activism, and if nothing else a method of survival in times of frustration. 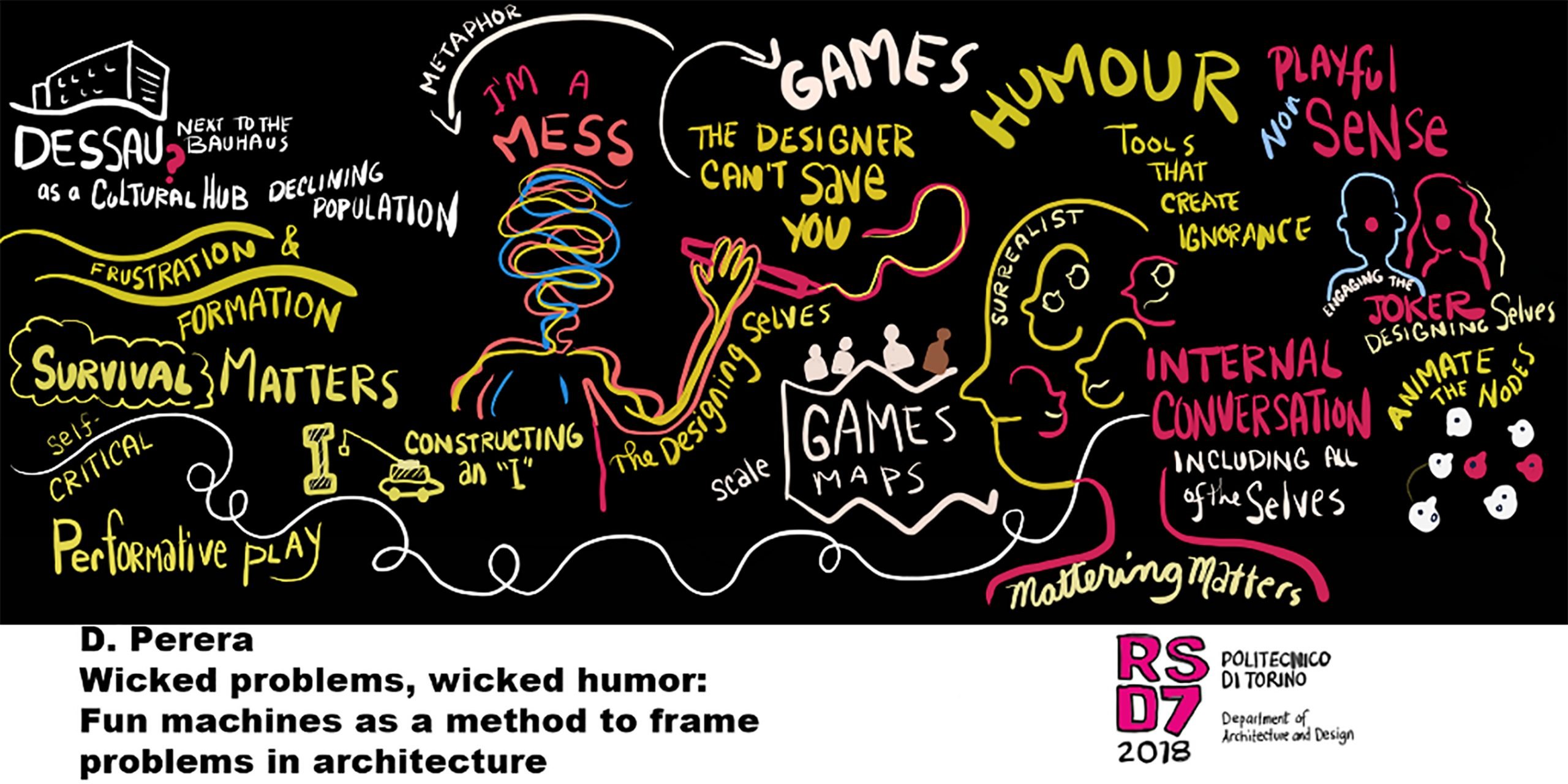