Water is one of the most abundant resources on Earth and it is inextricably linked to life. In the Earth Complex System water can be considered as the matrix of life, water molecules are the 99% of molecules in human body and a water shell surrounds every ion and molecule in the biological system. The majority of natural phenomena involve water and our existence is dependent on this precious substance, or the lack of it. However water is limited and despite of its ability to self- cleaning along the water cycle, its quality is vulnerable and fragile. Hence, water scarcity and water pollution represent tremendous issues at global level that call for rapid solutions.

The here presented research refers to the Systemic Design (SD) approach applied to the design of the water treatment system at the MonViso Institute, a real-world mountain laboratory for research, education and entrepreneurship in sustainability transformations and Systemic Design located in the Italian Alps (Ostana – CN). The Alpine Region is a really unique environment very sensitive to climate changes and therefore it is an ideal place where setting a living lab for testing new approaches to the sustainable management of water resources.

The application of the SD methodology to the design of the water system entailed a focus on the understanding of the water behavior both at molecular and at macroscopic level. Therefore the SD methodology drove the research through an intense exploration of the complex properties of liquid water touching a variety of disciplines from physics to chemistry until bioengineering and medicine that has opened the frontiers to a more complete understanding of water.

Theories and advanced models of liquid water are generally split among those that do not recognize a particular role in molecular water structure (Israelachvili, 2011), to those that provide an evidence of long-range ordering at room temperature (Pollack, 2013, et.al).
It has been shown that at a molecular level water does not have a homogeneous structure but rather is in dynamic equilibrium between the varying percentages of assemblies of different oligomers and polymers. The structure of these “clusters” or units themselves is dependent on temperature, pressure, and composition (Roy, 2005).

A previous PhD research project (Toso, 2015) has therefore focused on the investigation of these “emerging” properties with the aim of identifying innovative solutions for the treatment and use of water in accordance with the mechanisms through which it operates nature, valorizing water quality in a sustainable way. Part of the PhD research has investigated the water behavior at macroscopic level with a particular attention to the vortex technology.

To study the ability of vortex water to separate suspended solids a cylindrical device has been made in order to let water flow organizing itself into a vortex – a macroscopic structure has emerged spontaneously out of the flow. Lab testing proved a separation of Suspended Solids and Natural Organic Matter over the 95-98% in a single pass. (Toso, 2017)
Therefore, the research started from the exploration of the liquid water abilities in self-cleaning and self-organization at molecular level, and leaded to the design of a water system that drastically reconsiders the water usage at domestic level.
Thanks to a more holistic perspective on water it was possible to design a water system able to optimize water usage and to avoid harmful substances by taking advantage of the self-cleaning properties of water. The design concept here presented is based on the combination of the Vortex Water Technology and the Living Machine Technology.

The water system at the MVI has to supply 6 small buildings all over the year and eventually the watering of the plant growth area during Summer and Autumn. The water input comes from 3 spring water sources and also from meteoric water (both rain and snow). Seasonality is a huge variable in the water system that influences both input availability and water needs. Temperature also varies largely along the year: during winter time surficial water freezes, in spring time snow melting provides a large amount of water that needs to be collected and stored to sustain dry periods in the summer time.

The Water System at the MVI is designed to be self-sufficient and really connected to the territory. Therefore water has to be treated and used in a very efficient way and reused many times before letting it go to the Living Machine System that is the final waste water treatment stage of the MVI.

To properly design the water system the design phase is supported by a System dynamics model.

System dynamics (SDs) is a modelling tool which is used for discovering a system’s dynamic complexity. This modelling tool is used in several areas such as logistics (GUI Shouping et al., 2005) or urban economic growth in cities (Rusiawan et al. (2015), however, ecology is also the area where this method is often used (Mavrommati et al., 2014).

SD models can be built up with more development tools (Stella, Vensim), but here AnyLogic 7.3.6 is used.
Main elements of system dynamics are stocks and flows. In the case of a water system, we have built up the model around water tanks, that is the stocks are the water tanks (meteoric and spring water tank), and the flows are the inflow of meteoric water, the outflows are the use of meteoric water, such as washing, cleaning and toilet. The figure below shows this basic process. Spring water follows the same logic, where incoming waters (inflows) are the Fablab, Basecamp and Pond water, the outcoming waters (outflows) are cooking and drinking and personal care (e.g. shower). The grey water after shower goes to purification and will become as an inflow to the meteoric water. The final use of the used water is agriculture. The quantity of the water flow is calculated by the expected number of visitors.

This SD model can answer the following questions:

• The size of meteoric and spring water tanks for safe operation
• The effect of the expected number of visitors
• The possible shortage in meteoric and spring water
• The dynamics of the use of water
• The quantity of water, used for irrigation in agriculture.
The necessity of the use of dry toilets. The MVI water system is considered as a “living organism” where water is treated using chemical- free purification modules that take advantages of the biological based purification treatment from on hand and of the spontaneous solutes rejection in a free-vortex from the other.

The Systemic Design (SD) methodology here presented results as a supportive tool for helping the designer to look at the objective in its complexity and to organize all the actors of the project by giving them the ability to relate and evolve autonomously. As a consequence the individual parts of the system are intertwined, forming a virtuous network (autopoietic) of relations between the flows of matter, energy and information. In particular the SD methodology here adopted has been developed at Politecnico di Torino with the aim of implementing sustainable productive systems in which material and energy flows are designed so that waste from one productive process becomes input for other processes, avoiding being released into the environment. This model is inspired by the theoretical structure of generative science, according to which every modification in resources generates by-products, which represent an added value. Starting from the observation of natural phenomena, the SD approach aims to “learn from nature” not just for mimicking the natural technologies, but for designing a product system able to positively interact with a dynamic environment and an evolving society.

Illich, I. (1986) H2O and the waters of forgetfulness, London, Marion Boyars

Del Giudice E., Tedeschi A. (2009) Water and the autocatalysis in living matter; Electromagnetic Biology and Medicine, 28, 46. 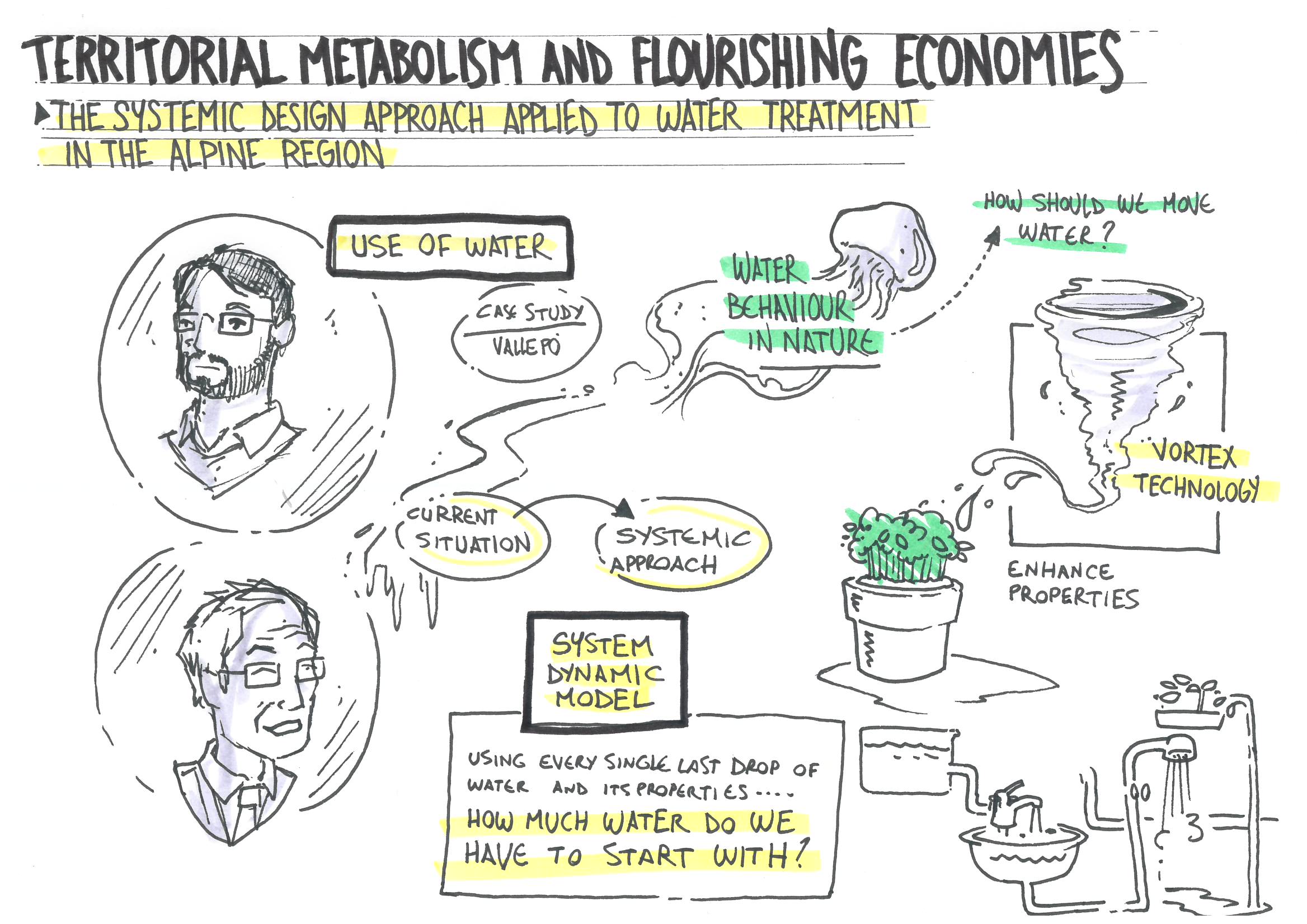