The Impact of Food Production on Public Health: Systemic strategies for a diffused and transversal prevention plan

Nowadays talking about industrial agro-food production also means referring to different environmental, economic and social repercussions. Although attention given to the way in which the food is produced has grown, the social costs linked to food production have been investigated with a more superficial approach. In many cases the most common mistake is to separate the quality of production processes of our food from our health, forgetting that social costs also translate into health costs if they become burdensome and prolonged over time for the majority of people. An insufficient and fragmented level of information about the strong link between food’s undeclared contaminants and chronic diseases reduces the consumer’s capability of choice in the purchase of food, further diminished by food primary selection executed by the large-scale retail trade.
While smoking is a choice, today getting sick through unreported contaminants contained in our food is not. Smoking is a bad habit, food is a necessity and as such it should not “poison” humans. In fact, diabetes and obesity are not the only disorders related to the quality of food production processes, where production processes refer to all the activities carried out along the entire production cycle, from seed to sale. In this complex scenario, the systemic approach acts as a tool for reading and analysing linear agri-food supply chains, characterized by chemical inputs such as antibiotics, hormones and pesticides (Bistagnino, 2011). However today the range of such contaminants is widening, especially if we consider all the chemical additives used during the extensive phases of food processing and all those substances released from polymeric packaging in the industrial or domestic conservation phase. In the human body they act as endocrine disruptors, interacting with other contaminants assimilated during the years (Maga, 1995).
This systemic phenomenon is deeply connected to two concepts, Chemical Body Burden, that represents the accumulation and interaction of chemical contaminants in the body and Acceptable Daily Intake (ADI), that is the quantity of pollutant legitimated to be swallowed daily without any apparent risk to health (Robin, 2012). The effects and the mutual interaction of these substances not chosen by the consumer are responsible for what the World Health Organization defines as an “epidemic” capable of perturbing the health of future generations. The list of diseases related to industrial food production is destined to longthen especially considering the current system of reproductive dysfunctions, neurodegenerative diseases and cases of teratogenesis in the fetus. In fact, most future pathologies will be of fetal origin: the transgenerational effects will gradually increase. For this reason, it is necessary to translate the concept of sustainable development and the same sense of environmental responsibility also in the field of public health. It is indispensable to start from the prevention of current generations to defend the health of future generations.
On the basis of this assumption, systemic design can lead to a behavioral change in people and in the actors involved in the health and agri-food field. In order to allow the future population to enjoy an optimal state of health a paradigm shift needs to take place within the management of public health, involving a focused and widespread prevention system, starting from the control of the pollutants included in the agri-food production system.

Since the ‘30s industry has controlled and influenced research on the toxicity of products, counterfeting the veracity of scientific results (Robin, 2012): this fast growing phenomenon has allowed higher thresholds of ADI and the legitimization of new hazardous substances. This is the reason why a multidisciplinary figure like that of the designer is essential to lead an improvement that starts from the bottom and works simultaneously on two different fronts through a shared change. This means firsly collaborating with professional figures closely linked to the epidemiological and nutritional fields and with public and private health facilities; and secondly by interacting with the patients and less aware individuals, so that a system of prevention and precaution can be put in place, extending also to those who are not affected by any diseases but who seek a balanced state of health.
The systemic designer has a responsibility in this sense, not only as a activator of relationships, but above all as a processor of a sustainable action strategy that necessarily includes a reversal of the approach to chronic diseases and the consumption/production of food.

On one hand, the doctor should keep his mentorship rebuilding it with greater awareness about the link between diseases and food production, investigating the food chemical exposure suffered by the patient, evaluating his eating habits and pursuing a systemic analysis of his disorders, interpreting the human organism as a set of strictly related organs (Capra,1997). On the other hand, it is also necessary a direct involvement of those who have not yet revealed any disturbance, so that a possibility of protection can be realized through the dissemination of information.

However, it is important that this system also involves food producers, so that they can move towards a production free from chemical contaminants, which follows the season and favors the local varieties. It is also essential to adopt recognized certifications and labels to reassure, inform and guide the user towards conscious consumption.
In this double context the systemic designer draws a dense network of relationships among different actors, within which the patient and the healthy individual to be protected represent the center, active part of the system, directly involved in the treatment and prevention process, where prevention means knowledge, conscious purchase, even self-production.
It is legitimate to ask why the designer represents the fulcrum of this network of relationships. The first answer is represented by the fact that he is simultaneously planner and user of food/health systems, consumer and health seeker (Jones, 2013). The real motivation lies instead in his transdisciplinary education, which supports him in comparison with other branches of knowledge.

Working in the perspective of sustainability and territoriality, it responds to global challenges with ethics and great intellectual honesty, always taking into consideration the peculiarities of the places and the communities in which it operates, which become an integral part of a sustainable, functional, efficient project. Nevertheless, there is another aspect that is not negligible: the systemic designer stands above all conflicts of interest, moving away from the will of the big agro-industrial and pharmaceutical corporations, planning for a sustainable well-being shared by all the collectivity involved, that does not allow tampering and disinformation. Therefore he plans a path that can become a guide towards a behavioral change, through educational projects that stimulate daily qualitative actions and choices (Wendel, 2014). Products, services and territorial strategies change their focus, moving from the profit to the health of individuals and the environment in which they live. However, in order for the connections designed between users, producers, food and health institutions to be constructive and lasting, the designer undertakes to create a dialogue between disciplines, languages and distant professions, minimizing conceptual and communicative obstacles, reconciling different cultural backgrounds. Thus its mediator role becomes fundamental for the achievement of sustainable compromises between different visions, through the objectification of critical points and possibilities. He, therefore, stands as a designer and observer of the system, avoiding imbalances in terms of costs and benefits.

Today there are many case studies developed to bring people closer to the theme of well-being achieved through food, however, most of them rarely collaborates with a team of specialized figures. The largest number of cases helps the users find local and seasonal products and meet direct producers. Some platforms aim to guide users towards a more conscious purchase through complete descriptions in terms of nutritional values, composition, etc. Almost all use tools such as apps and sites to facilitate online purchase, but the downside is the absence of a reliable source of this information and that of specialized support fugures.

Moreover, there are some very interesting isolated cases, which although they do not consider the involvement of the designer profession, they assist the interaction among patients, medical figures, food-producers and chefs for the prevention of the diseases. (an example is Diana 5 Project, conducted by the Dr. Franco Berrino and the “National Cancer Institute, based in Milan). Through this type of projects the level of awareness achieved is higher, thanks to the direct involvement of the patient in the production process of the daily meal. In addition, they represent an excellent example of design application, because it takes strength from relationships, experience and direct comparison. The aims of this research are intended to be part of the Health System for Sustainable Living sector and are not far from the approach pursued by the Medical Design frontier, but with an additional variable: the consideration of the constant chemical exposures to which man is subjected.

Nowadays a real revolution of public health is urgently necessary and this can happen only by starting from education, training and interaction, so that knowledge can become an instrument of power, while food an instrument of prevention rather than a cause of a global system of growing diseases.

The Impact of Food Production on Public Health: Systemic Strategies for a Diffused and Transversal Prevention Plan from RSD7 Symposium 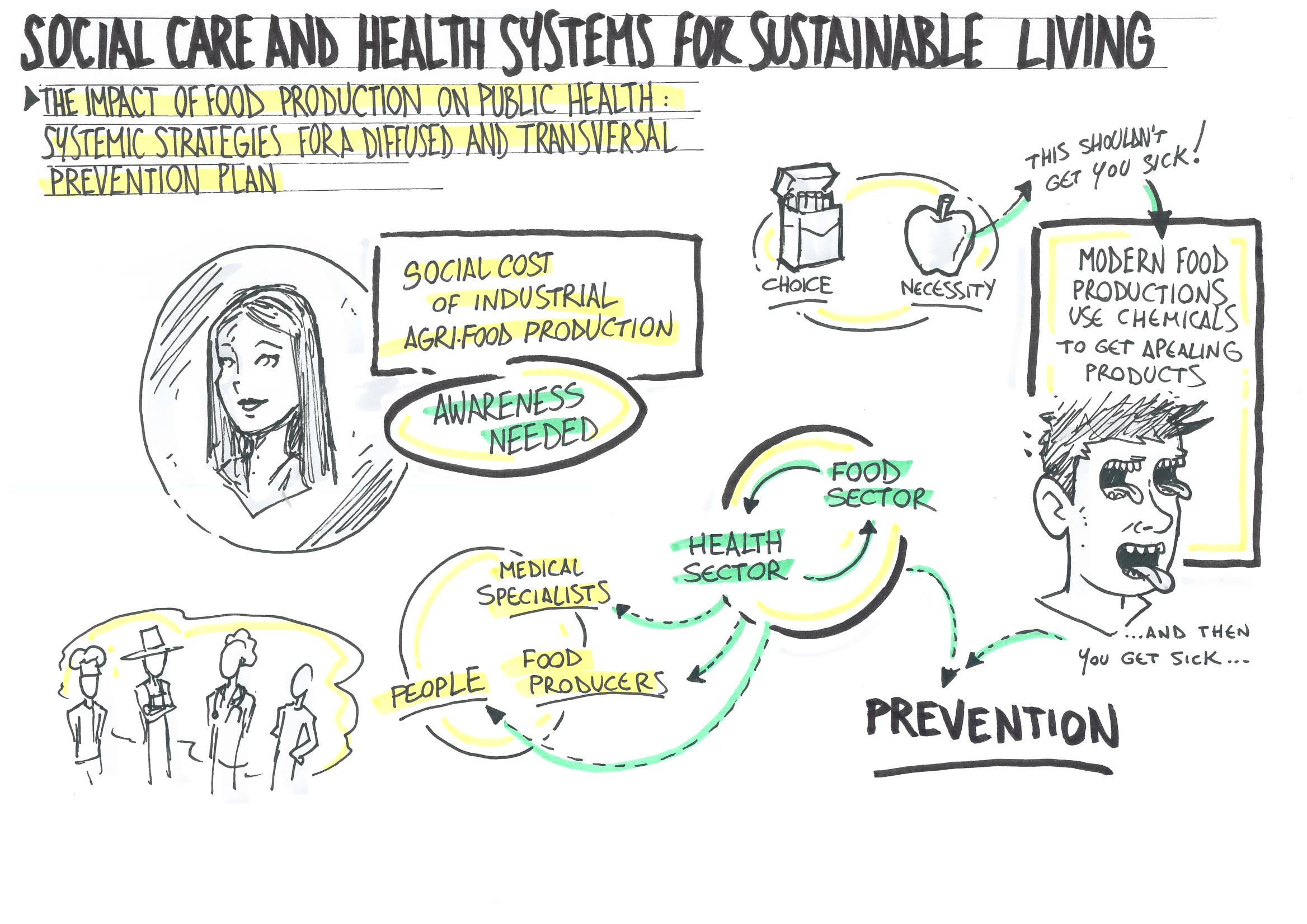