Working with Systemic Design during four years in Brazil we have been able to make some connections between different productive agents, having as a starting point the relationship among our academic activities and the movement of Community Gardens. Agriculture and nutrition are some of the society’s fundamental pillars, also considering the context of the brazilian economy and, for that, these themes have been considered to be a good starting point to spread the Systemic Design principles.

Motivated by the Brazilian Law n. 9.795, from April 27th, 1999, that establishes the National Environmental Education Policy, the environmental education is considered “an essential and enduring component of national education and must be articulated at all levels and modalities of the educational process, both formal and non-formal”. For this, the graduate course in Visual Arts, offered at the Design School of the State University of Minas Gerais (ED-UEMG), that forms art teachers of basic education, has in its program the discipline “Special Topics in Environmental Education”. We also offer academic extension activities with short courses on vegetable and flower urban gardens in small spaces that create, within the university, a dialog on different aspects of Design, on products lifecycle, new Economies (such as the Distributed Economy and Sharing Economy), and to promote exchanges between the academic community and the society.

Considering the intertwined nature of the environmental issues to its social and economic aspects the main purpose of the discipline is fostering Systemic Networks of Integral Endeavours.
An Integral Endeavour is any productive activity (be it performed by an industry, a household, an individual or the nature) that operates considering its holistic relations and is grounded on integral sustainable values (that is, works aiming at having social, economic and environmental resources enough to provide indefinite duration of the activity). It defines goals and builds networks, based on Systemic Design principles: 1) generating zero waste, by using the output (waste) of a system as the input (resource) of another one, optimizing the use of resources, creating an increase of cash flow and also new job opportunities; 2) identifying and fostering relationships, since the components of the network have common values and interests, and due to the recognition of the importance of connections of multiple areas of knowledge and performance; 3) being self-productive, sustaining itself defining its own paths of action and the joint coevolution of the elements of the system, all of which with equivalent importance; 4) giving special value to the local context and resources (human, cultural and material), which contribute to solving local problems and create new opportunities; 5) place people in the centre of projects, that is, valuing people over products, being the contribution to the quality of life, with inclusion and accessibility, more important than the production of goods.

As the discipline is very interactive, with students also bringing their experience to the classroom, some very rich opportunities arise. A very interesting one is evolving as the connection among the communities of four slums in different areas of Belo Horizonte (the third most populated and developed city of Brazil), three universities and the urban planning institution from the local administration (URBEL). All four cases have in common the existence of a vacant area within the community, some residents that see it both as a threat if left unused and as an opportunity to make some action for the collectivity, and the opportunity of receiving the support of the academy and public administration, having cultural activities as a bond. In some cases, it is being built also opportunities of association with entrepreneurs.

The first community is in the area of “Morro das Pedras”. A student from the Visual Arts has invited us to give a workshop within the community to produce fertilizer from organic waste to enrich the soil of an area where there used to be some sheds that had been removed by local administration because it was beneath a high voltage powerline. In this area they have now a community vegetable garden, where 6 persons from the community make volunteer work donating 2 hours a day during working days and 5 hours on Saturdays. Organic waste, some seeds and seedlings are donated by 11 families that participate in the project in exchange for a weekly bag of vegetables distributed to the children of the local school that also participate in this movement. After about a year of development of the vegetable garden along with artistic and cultural activities, the community has won a contest for a financial support of the Brazil Foundation organization and one of the community leaders has won a photography contest with an image picturing the community. The values of Integral Endeavours have served as guidelines to define activities as well as style of leadership, community engagement, education and economic sustainability decisions.

The second community is in the area of “Santa Lucia”. It has also an area that, because of its geological risk has also been made vacant by local authorities, represented by a government organization called URBEL. Professors from a local private university (UNA) have been asked by locals to give support to make a community garden. From the partnership established among UNA, ED-UEMG and UFMG due to their common interests in research and extension projects, the group is working together with the community in this initiative, making collective actions (mutirões) and surveys to understand the culture of the community and their needs. It represents an interdisciplinary effort with the engagement of designers, architects, economists, sociologists, engineers, gastronomists, nutritionists, also with the support of URBEL, bringing together human and material resources.

Throughout this work, a spontaneous management group has arised, establishing unprecedented interactions in the community, with the potential of increasing their social cohesion. From the principles of Integral Endeavors, Agroecology and Solidarity Economy, the group of residents, researchers and students have developed a series of collaborative actions, different from the capitalist market logic. At the same time, rich discussions about the principles of the vegetable gardens, its management and distribution of production are promoted, at the same time emphasizing the quality of what is being produced (healthy food, without pesticides) and the importance of the conscious consumption. It is noticed that some residents extended their autonomy and voice, because before they were shy and now, they can express themselves and realize interventions that are gradually transforming the space.

The third community is in the neighbourhood of Taquaril. In this case, URBEL has invited the academy (represented by UNA, UEMG and UFMG) to support some families to develop their urban gardens in a preservation area. There, the growth of dense bushes nearby the residences represented a danger to the families for hiding illicit activities as well as synanthropic animals that are a threat to human health. Since a retired resident had already expertise with agriculture, he should be the reference and inspiration for the neighbours. He is succeeding in creating a very productive space, although the neighbours are not quite engaged yet. Also, by practicing Integral Endeavors and Solidarity Economy values, we made a composting workshop with the families and are going to make activities to involve and foster collaboration within the community.

The fourth case is in the “Aglomerado da Serra”. There, there is a group that is rather independent, having already a practice of involving the community in the selective collect and organic compost making with and without worms. Some leaders of the community give workshops on this practice and sell boxes for vermiculture. We have participated as students in their workshop and afterwards have invited them to take part in a short extension course on vegetable and flower urban gardens that was offered by the ED-UEMG. Agroecological practices have been (are) the main focus of the group, as a way of life, along with healthy eating and income generation.

All these initiatives have as main objective the strengthening of social cohesion within the communities and of their autonomy to be reflected in self-management, broadening their collective identity and health promotion by food sovereignty, strengthening conscious agents, protagonists of relationships and of their living space. The theoretical foundations are the principles of Systemic Networks of Integral Endeavours, Agroecology for Food Sovereignty and Social and Solidarity Economy. Social inclusion, valorisation of diversity, exchange of academic and empirical knowledge are also cornerstones of our work.

Systemic network around education and community gardens from RSD7 Symposium 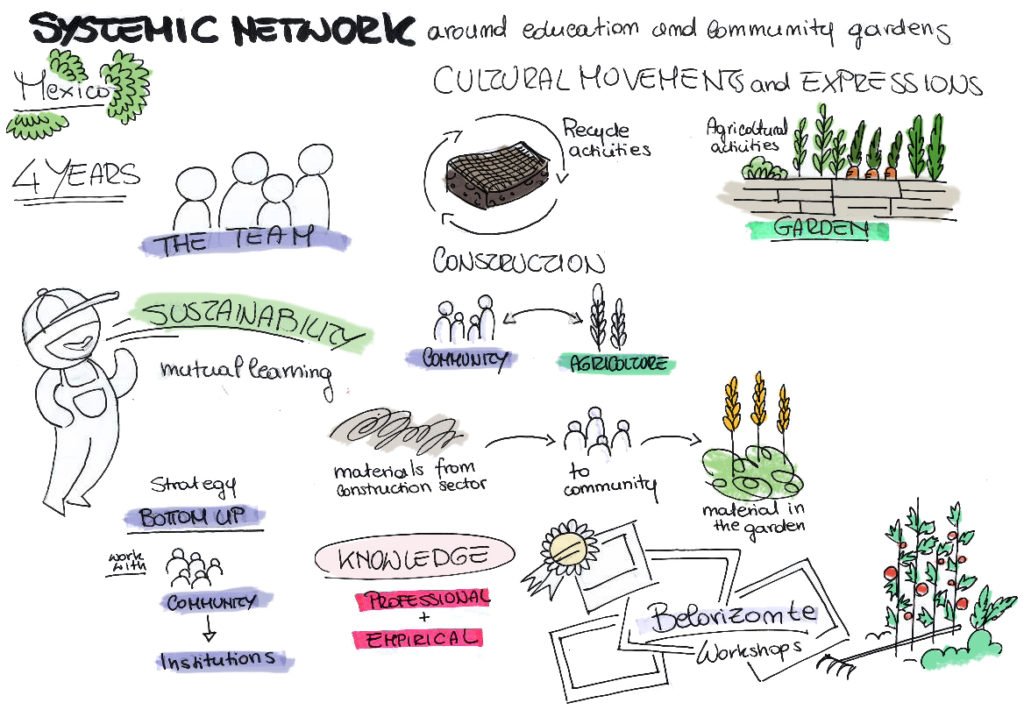