Systemic Design in Food Security and Resilience : Building A Holon

The situation of concern in this paper is that of Food Security. In a previous paper [Darzentas et al., 2017], the I KNOW FOOD (IKF) project and its com- position and objectives were introduced. As its name suggests, an overall aim is to integrate knowledge about food systems. Also, the project examinesthese systems in the light of food system resilience. The project defines foodsystem resilience as “the ability to learn, adapt and transform to cope with external and internal stresses and shocks in order to maintain stable levels of nutritious food supply”1.

The word ‘systems’ is used in food studies very frequently, as the food re- search literature recognises the interconnectivity of various elements andtalks about “the food system”, but it is easier to find research that deals withparts of systems independently. This has been changing, with more rese-archers trying to find ways to study food systems more holistically. Suchresearch (Ericksen, 2008; Bland and Bell, 2017; Horton, 2017) on food secu- rity is working to draw in sources of multiple interactions, to identify key processes, drivers, multiple feedbacks and outcomes. This then leads to some thought-provoking perspectives on how components are interlinked and could potentially lead to “actionable improvements”. This wider, more holi- stic, agenda for food security research may include many different factorsnot apparently directly influencing food security, such as over-consump- tion of ‘bad’ food and obesity, to be studied along with more traditional foci such as increasing food production and improving food value chains. The IKF project belongs to this newer tradition of taking a wider, more holistic, perspective, and has a main objective to integrate many different types of knowledge about food.

Our approach is grounded in Systems Thinking and Design to capture, learn about and develop deep and shared understandings of the problem space of Food Security. Such understandings are necessary to move towards appro- priate and robust design interventions. An initial step in this approach is to build a holon (Darzentas et al., 2017). We adopt the meaning of the Greek word ‘ὅλον’ which means ‘whole’ or ‘everything’, in relation to the problem space. The holon is not a systemic view of a complex problem, in our case that of food security. It consists of emerging stakeholders’ issues with the components and links considered relevant. To build a holon, design methods such as those informed by ethnographic as well as participatory activitiescan be used. In this process, a holon may be refined many times, as the lear- ning and understandings deepen. The holon when ‘translated’ into a syste- mic language makes use of known tenets and principles of systems thinking. In this way, notions such as resilience can be examined using the Holon to situate them in the problem space.

IKF proposes the use of the lens of resilience to examine food security. Resi- lience has been conceptualised in at least three ways; as absorbing shocks, as preventing shocks, or as adapting to shocks whether in socio-ecological sy- stems (Béné et al., 2016) or socio-technical systems (Taysom and Crilly, 2017), and in some cases more than one of these forms of resilience are apparent.For instance, an aid agency may provide first aid to help absorb the shockfrom an emergency, but also try to put in place preventive measures to resist unwanted changes, or even a development project to transform the current food production/consumption processes so that they are not vulnerable in the future to the type of shock caused by the emergency. Furthermore, de- spite the pervasiveness of the term resilience, it is generally considered, in current discourse, as a ‘good thing’. But resistance to change can mean that undesirable states of systems remain (e.g. resistance to changing known ‘bad’ dietary habits). Finally, there is the problem to understand what impacts creating resilience in one part of the system may have on other parts of a system.

This paper presents ongoing work initially bringing researchers togetherinto a shared space to develop understandings of the IKF objectives. A first step was to move from the ‘given’ system definitions (e.g. ‘supply chain sy-stem’, ‘healthcare system’, as well as ‘stock’ definitions of actors and roles (e.g.farmer produces food) to develop fresh understandings and reveal emergent properties. Although these researchers are just one group amongst the sta- keholders engaged in IKF project, they are each working in partnership with the main groups of stakeholders. For example, researchers working with food producers meet with farmers’ groups whose motivation is exchange of information between themselves, and the researchers engage in social lear- ning to immerse themselves in their world. In doing so, they bring a richer understanding of the motivations and values, the limitations and outside constraints that come into play in the farmers’ spheres of activity. Bringing these richer understandings to the building of a holon allows for differen- tiated emphases from the more commonly accepted ‘food systems’ actors allowing possible re-orientations.

Already, some very promising preliminary observations emerged that de- monstrate the usefulness of the systemic design approach, for the groun- ding of resilience in the project:

• A description of the situation of concern elaborated during the workshopsshows interesting differentiations when contrasted with the official defini- tion of Food Insecurity from the Food Alliance Organisation. Their careful-ly crafted definition, which is periodically reviewed, states that Food Secu- rity is:

“A situation that exists when all people, at all times, have physical, socialand economic access to sufficient, safe and nutritious food that meetstheir dietary needs and food preferences for an active and healthy life (FAO-2001)”

In contrast, the workshop elaboration paid attention to human self-suffi- ciency, introducing the concepts of means, agency and knowledge as ne- cessary to access food, in contrast to the ‘physical social and economic’ ofthe official definition. It qualifies food as being ethical, as well as nutritious, and affordable, and finally, they introduced the notions of care for the envi- ronment as well as the cultural acceptability of food, that do not exist in theFAO definition. Their final elaboration was:

“Enabling people to have the means, agency and knowledge to access ethical, adequate, nutritious, affordable, culturally and environmentally acceptable food”

• Acknowledgement of the influential role played by the stakeholder grouptermed ‘communicators’. This group includes people such as food journalists. Although the academic world recognises the importance of communicators, with whole journals dedicated to research, (e.g. the Journal of Environmen- tal Communication), within the food security literature they do not seem to feature as a stakeholder group. Yet, evidence of their activity abounds,whether it is exerting influence on consumers via advertising; or their keyrole in informing and educating consumers about safe and nutritious foodpractices; or as conduits to filter and popularise scientific results to consu- mers with practical recommendations regarding dietary information. Of course, as everywhere, the role of information and communication as apowerful and influential tool is well recognised, but when dispersed intomakers and writers of documentaries, newspaper articles, and commissio- ned reports, they are not easily recognisable as stakeholder group.

• The importance of the 3rd Sector: those with ‘on-the-ground’ knowledge, are those who can be said to be actively engaged in implementing resilience(whether trying to absorb shocks carrying out first aid in emergencies, orwhether engaged, perhaps after a disaster, in trying to build resistance or to transform).

• The nature of the potential of stakeholders. Notwithstanding the many inequalities that are present, each stakeholder appears to have some mecha-nisms, to influence, affect, change, or even disrupt flows of material and of information within the holon. Further refinement may help to understandthe nature of this potential.

The richness of a holon such as the one in Figure 1 offers an opportunity to identify some of the effects that an external stress/shock, for instance, mi- ght have within the captured holon. This may also then allow for some use- ful speculation on the type of resilience required to face up to those stresses. Of course, it must be said again that any capturing and understanding of theproblem space is evolving iteratively, so that the holon may be refined againand again.

By stressing or ‘prodding’ the system, it is possible to see where the potential ‘shockwaves’ hit. For example, in Figure 2 above, the awareness campaign aimed at consumers, may also affect others, such as retailers, and this may have a knock-on effect to the link between retailers and producers. The ho- lons allow for creating understandings of what types of resilience are needed by the various stakeholders both to resist being affected by the shockwaves, or to have mechanisms in place to adapt to the shockwave.
Identifying such pathways allows for understanding the possible forms that resilience, if required, could take. Translating into systems language provi- des a platform to move towards creating interventions where tried and te- sted design methods can be used. Again, it is emphasised that a very impor-tant benefit of the systemic design approach is that, because of the way the‘paths’ to emerging subsystems are generated, the stakeholders involved in each one of those, can ‘meet’ again, when necessary, back at the ‘system’ (or translated holon), or even at the holon itself. That may be necessary because of the iterative nature of the evolving understanding and learning, as well as the dynamic nature of systems’ characteristics such as borders and envi- ronment which change continuously.

Thus, the holon offers stakeholders and designers a common platform of re-ference when needed to clarify and redefine evolving issues. Our work hasshown that building a holon can be an important part of the process to reachnot only deeper understandings of the problem space, but also to refine tho- se understandings, to be able to illuminate them with the lens of systemic design, and to speculate on what design interventions towards what kinds of resilience within the system can be designed so as to minimise disrup- tions, and improve the nature of esistance where required.

Taysom, E. Crilly, N. (2017) Resilience in Sociotechnical Systems: The Perspectives of Mul-tiple Stakeholders, She Ji: The Journal of Design, Economics, and Innovation, (3) 3, 165-182

Systemic Design in Food Security and Resilience: Building A Holon from RSD7 Symposium 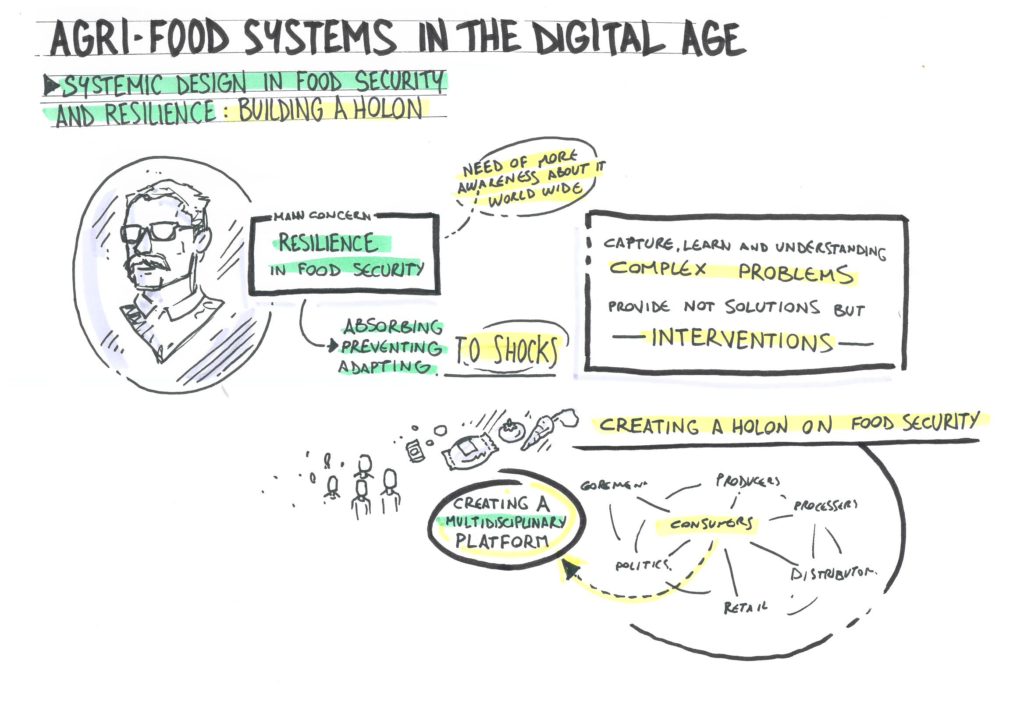