Systemic Design and Its Discontents: Designing for Emergence and Accountability

“Any machine constructed for the purpose of making decisions, if it does not possess the power of learning, will be completely literal-minded. Woe to us if we let it decide our conduct, unless we have previously examined the laws of its action, and know fully that its conduct will be carried out on principles acceptable to us! (Wiener, 1950)”

In this paper we seek to advance the discourse and prospective impact of systemic design through challenges and opportunities centred in perspectives from psychology and ethics. We argue that systemic design is adolescent. It has a growing sense of its power and potential, yet it is prone to clumsiness and yawning lapses. To advance its role in fostering inclusion and flourishing, how might we lead systemic design to greater maturity, responsibility, self-awareness, in a word, to accountability?

We assess that systemic design is on track to fulfill its potential as a holistic practice and discourse, akin to an advanced form of service design. Yet for this to happen the community must undertake more careful processes of development. Systemic design needs to balance its ambition and confidence with humility and ethical commitment. Toward this end we propose that systemic design covet skills, insights and awareness from its ‘aunts and uncles’. We indicate that greater use of psychology is needed to inform descriptive work, and more ethics is needed to uphold normative purposes.

We advocate developing systemic design theory and practice through the further introduction of concepts from social and group psychology, as well as ethical governance. This groundwork is timely and needs-based, as it sheds light on potentially manipulative techniques at the intersection of choice, persuasion, influence, politics, and other nonlinear, societal forces. Our proactive goal is to better equip systemic design to address complex problems at the level of UN Sustainable Development Goals (SDGs), including equity, diversity and inclusion. We examine developments at the intersection of democracy, social media and automation that are highly unsettling, including the use of Facebook users’ data by Cambridge Analytica in the context of the Brexit campaign and the 2016 US election. In this light we articulate an urgent and remedial call for the systemic design community to develop and uphold a code of professional ethics and conduct, not unlike those adopted by engineers, doctors, management consultants and planners.

We ask, has psychology successfully lent its wisdom to other disciplines? Indeed, behavioural economics is one pathway that has found significant value and traction. This project, which synthesizes demonstrably irrational human motivations and biases into the brittle, positivist models of classical economics, has begat a more resilient and mature hybrid. We take encouragement from experiment and exploration in arenas that hold strong interest for systemic design: policy, governance, community development, economic cooperation, innovation.

To better understand inherent systemic design’s risks, and establish historical and critical context, we ground this study with reference to early twentieth century work, including Norbert Wiener, considered “father of cybernetics,” and Freud’s American nephew, Edward L. Bernays, portrayed as “father of public relations.” More than any single figure Bernays understood and anticipated spaces and practices of persuasion including marketing, public relations, and consumer psychology. In the early twentieth century Bernays pioneered forms of ‘advertising without advertising’, that is to say product placement.

His works provide considerable architecture for modern mass culture. From their titles alone we may glimpse both the power and pitfalls of industrial, design-fueled techniques of persuasion: Propaganda, 1928; Public relations, 1952; The Engineering of Consent, 1955. Our brief critical review reveals that Bernays ideas are unsettling in their relevance to contemporary concerns and its frank assertion that democracy requires guidance and constraint by a shadowy elite. Bernays’s work has never been well known to the public. This is all the more surprising considering his long and influential shadow. We argue that his work is critical to understanding the use and misuse of persuasion for social purposes. Bernays describes ‘engineering consent’ as follows:

“Use of an engineering approach—that is, action based only on thorough knowledge of the situation and on the application of scientific principles and tried practices to the task of getting people to support ideas and programs. (Bernays, 1955)”

We lay out tactical scaffolding for the psychological maturation of systemic design through a discussion of projects led by the authors. Here the values, design principles and choices demonstrate alternatives to the twentieth-century manipulation model and to other inherited, status quo approaches. Skelton outlines the open software platform Betaville, a massively participatory, editable, urban mirror world project elaborated by an international network of partners and collaborators. Van Alstyne presents Strategic Innovation Lab, a large, decade-old Toronto-based social lab dedicated to envisioning possible and preferable futures through participatory foresight. Our strategic goal is to better prepare the systemic design community for two purposes. We want to address complex problems at the level of UN SDGs, including reduction of poverty, hunger, inequality, consumption, and GHG emissions, while boosting wellbeing, sanitation, social justice, innovation, and strong institutions. More troublingly we want to stem and mitigate consequences arising from broad design and deployment of automated and augmented systems in which emergent dynamics lead to unsettling social and political effects.

This work extends and deepens the theoretical framework “Designing for Emergence” (Van Alstyne & Logan, 2007), presented in RSD5 Toronto (Van Alstyne & Logan, 2016). Understanding innovation and knowing how we might give rise to desirable, emergent processes within systems requires us to understand emergence — bottom-up forces of morphogenesis. As one exchange at RSD6 pointed out: We don’t design systems, we design pathways through systems. In summary, the purpose and process we are advocating for the systemic design community is to advance our maturity and thereby our positive impact for the many, not the few. In other words, we want to learn to act more responsively and responsibly, to do both risk-taking and risk-management. Is this enterprise deeply intertwined with psychology and ethics? Clearly. Does this describe the primary opportunity and challenge facing Systemic Design as a community? We think it does.

Latour, B. (2008). A cautious Prometheus? A few steps toward a philosophy of design (with special attention to Peter Sloterdijk). In Proceedings of the 2008 annual international conference of the design history society (2–10).

Van Alstyne, G. (2005). From Induction to Incitement: Inside the Massive Change Project. What people want : Populism in architecture and design, 189–205. 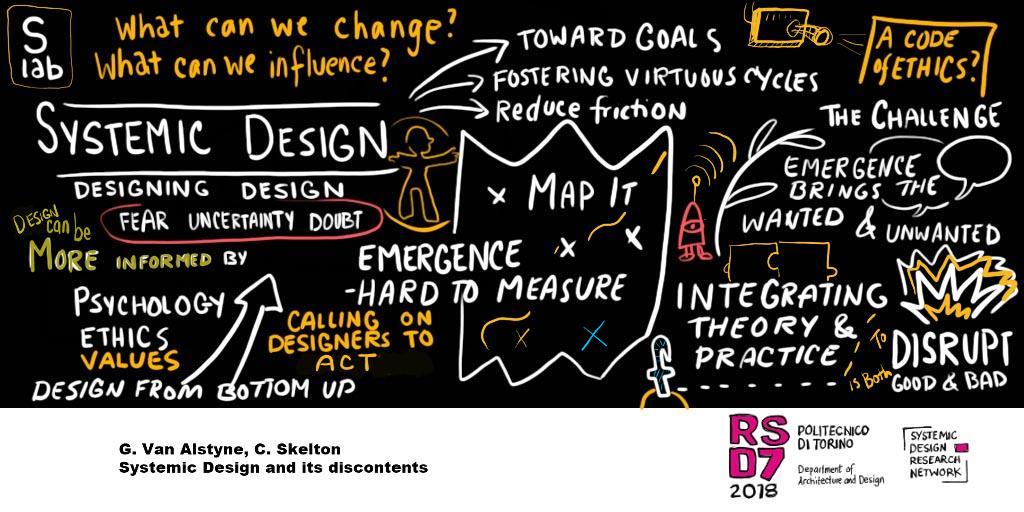