System Design for Sustainability for All: S.PSS design applied to distributed economies

One major issue attached to the transition towards a sustainable society is that of improving social equity and cohesion in low and middle-inco- me contexts, for an environmentally sustainable re-globalisation process characterised by a democratisation of access to resources, goods and servi- ces (Assembly, UN General, 2014). Regarding such transition, Sustainable Product-Service System (S.PSS) has been studied since the end of the 90th (Mont, 2002; Goedkoop et al, 1999; Tischner, Rayan and Vezzoli, 2009; UNEP, 2002; Vezzoli et al, 2014) as one of the most promising offer/business models.S.PSS has been recently defined as: “an offer model providing an integra-ted mix of products and services that are together able to fulfil a particularcustomer demand (to deliver a “unit of satisfaction”), based on innovative interactions between the stakeholders of the value production system (sati- sfaction system), where the ownership of the product/s and/or its life cycle responsibilities remain by the provider/s, so that the economic interest of the providers continuously seeks environmentally and/or socioethicallybeneficial new solutions.” (Vezzoli, 2018)

Distributed Economies (DE) is another model studied since 2005 (Johansson, Kisch and Mirata, 2005; IIIEE, 2009) as an alternative economic structure to the dominant Centralised one promising for locally-based sustainabi-lity (Johansson, Kisch and Mirata, 2005); DE has been recently defined as“Small-scale production units, located by or nearby the end-users, whether individuals, entrepreneurs and/or organisations/institutions, i.e. the produ- cers are the same end-users or nearby them. If the small- scale production units are connected with each other to share various forms of resources and/or goods (physical and knowledge-based ones), they become a Locally Distributed Economy Network, which may in turn be connected with ne- arby similar networks. If properly designed they are promising to promote locally- based sustainability, i.e. Sustainable Distributed Economies (S.DE).” (LeNSin Polimi team, 2018)

The paper discusses an innovative system approach to sustainability, i.e. the win-win potential of coupling S.PSS and DE for a sustainable society for all, which is the Research Hypothesis of the LeNSin (the international Learning Network of networks on Sustainability) project, funded by the EU Erasmus+ programme involving 36 universities from Italy, Finland, Netherlands, Uni- ted Kingdom, China, India, Brazil, Mexico and South Africa. The Research Hypothesis runs as follow: (Polimi, 2015)

A S.PSS applied to DE is a promising approach to diffuse sustainability in low/middle-income (all) contexts, because it reduces/cuts both the initial (capital) cost of DE hardware purchasing (that may be unaffordable) and the running cost for maintenance, repair, upgrade, etc. of such a DE hardware (that may cause the interruption of use), while increasing local employment and related skills, as well as fostering for economic interest of the producer/ provider to design low environmentally impacting DE products, i.e. resul- ting in a key leverage for a sustainable development process aiming at de- mocratizing the access to resources, goods and services.

Shifting the concern of the design role, the following Research Hypothesis (Polimi, 2015) has been studied by envisioning a new system design role to design for S.PSS applied to DE.

Both Research Hypothesises have been explored and characterised within the LeNSin project with the following process: each of the 36 partner insti- tutions carried out literature review on the topic, followed by a coordinated case study analysis; the results of those activities were shared between all partners in a meeting and trough the project web platform. These activities were followed by 5 seminars held in Brazil, South Africa, Mexico, China and India, where the partners gathered academics, companies, NGOs, govern-mental institutions, etc. This led to the a refinement and characterisationof the Research Hypothesises. All produced that far were the bases for thedesign and implementation of the first round of 5 pilot courses held in thenon-European partner countries, where local and European teachers were involved in the teaching and evaluating boards. All of the learning resources (syllabus, videos of the lectures, slides, case studies, tools, etc.) have been sha- red with other partners right after the end of each course. A second round of pilot courses was then carried out with the same logic in different universi- ties and with different guest EU teachers and observers. At the end, a total of 10 pilot courses were carried out, each of them evaluated by a questionnaire given to both students and professors. A method with a set of design tools for System Design for Sustainability for all (SD4SA) is now available.

The paper gives a particular attention to the description of a Sustainability Design-Orienting Scenario for S.PSS applied to DE, as introduced by the po- larity diagram below.

Finally, the following new role of designer is presented (Polimi, 2015)

“design of S.PSS applied to DE, i.e. the design of the Systems of Productsand Services that are together able to fulfil a particular customer demand(deliver a “unit of satisfaction”), within the DE paradigm; based on the de- sign of innovative interactions among locally-based stakeholders, where the ownership of the product/s and/or its life cycle responsibilities remain by the provider/s, so that economic interests of the provider/s continuo-usly seek both environmentally and socio-ethically beneficial new solu– tions, i.e. solutions accessible to all”.

The paper contents are innovative as both the understanding (and the de- scription) of the win-win potentials of S.PSS applied to DE; and the related system design approaches, skills and tools are new. Those outcomes resulted from a process where their validity and characterisation have been carried out by a well- integrated groups of worldwide researchers. Finally, all the learning resources on the knowledge-base and know-how developed in the project are uploaded on the LeNS web platform, where they could be downloaded free of charge, with an open and copy-left ethos. The outcomes achieved are already innovative and relevant, but at the same time, it is cle- ar that new research activities are needed to better identify the win-win characteristics of S.PSS applied to DE as well as the approaches and the skills for a new generation of designer adopting a system approach to effectively address the sustainability challenge.

System Design for Sustainability for All. S.PSS Design applied to distributed economies from RSD7 Symposium 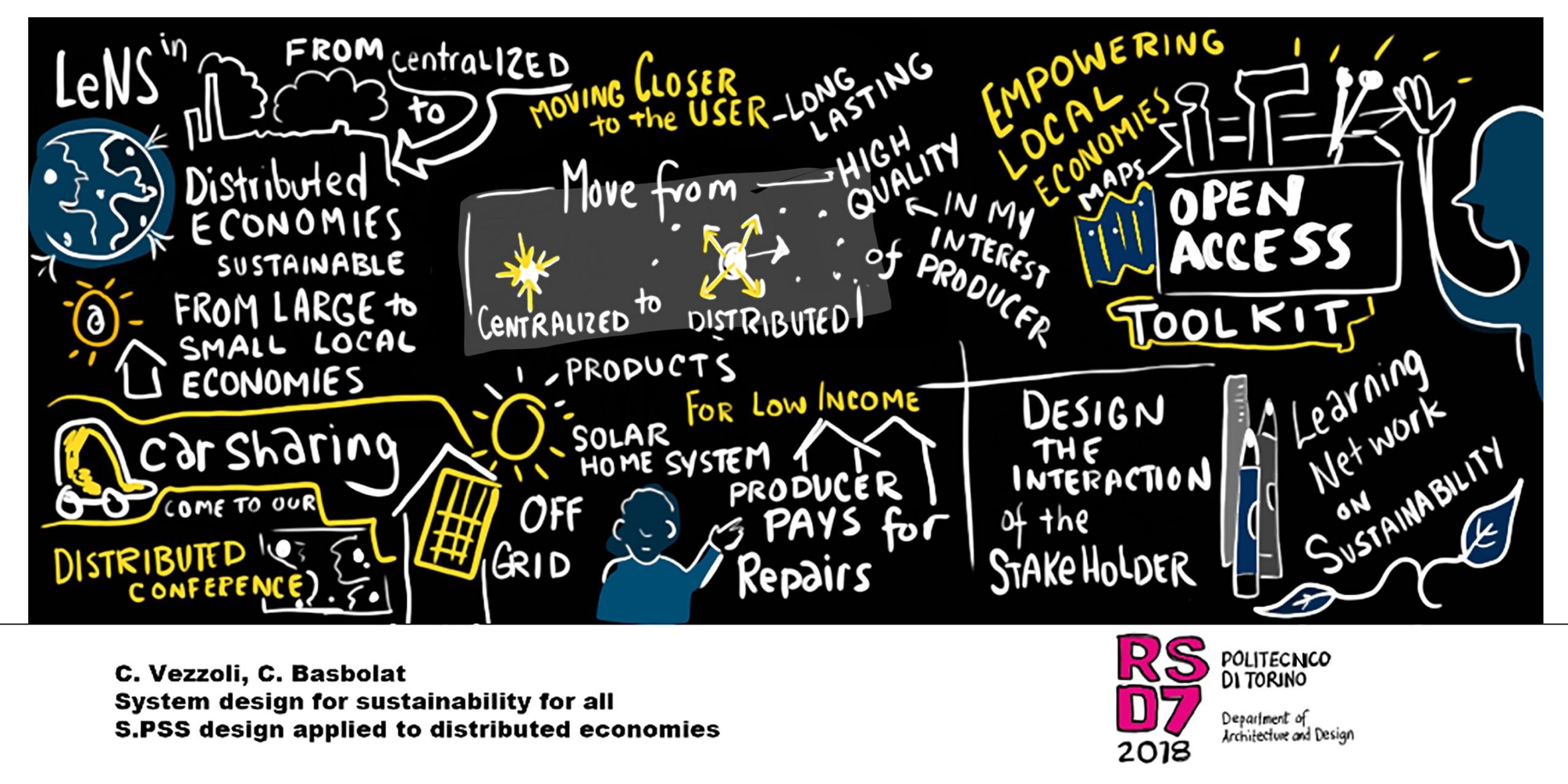