The healthcare challenges of our society are placing increasing pressure on limited resources available due to an aging population and a substantial growth in patients with chronic diseases (Engström 2014). Due to these challenges, the Norwegian healthcare system is often referred to as being in crisis. However, these challenges alone do not cause healthcare crises, rather crises develop when there is an incapacity to rethink how we meet these challenges, how care is designed for and how care could be provided differently (Helse- og omsorgsdepartementet 2013; Oslo: Helse- og omsorgsdepartementet. 2014). To avoid devastating financial and societal consequences in the long run (Jones 2013) and to respond to the wicked problem (Rittel and Webber 1973) of healthcare provision, there is a need for immediate and innovative solutions.

Service design and co-design are therefore increasingly being called upon to offer approaches and methods to facilitate collaboration and to harness available resources (Baxter, Mugglestone, and Maher 2014). Services are described as complex, hybrid artefacts made up of things, places and systems of communication and interaction, but also of human beings and their organizations (Meroni and Sangiorgi 2011). Healthcare systems alone consist of multiple stakeholders (i.e. consumers, patients, clinical staff, administrators, insurers), that need to interact with multiple services (i.e. primary care to academic institutional networks) in multiple sectors (from clinical practice to insurance and government) (Polaine, Løvlie, and Reason 2013). The communication between these diverse stakeholders needs to be supported in order to be able to re-think and innovate healthcare provision.

High expectations are put on multi-stakeholder collaborations to produce innovative outcomes despite extensive challenges in the relationships between stakeholders, such as the lack of an internal team culture, team communication (Sarin and O’Connor 2009) and a common understanding and a shared vision of the object of development (Molin-Juustila 2006). The motivations, needs and relations of and between, stakeholders need to be understood and regularly taken into account, as relationships also need to evolve and shift through time, (Polaine, Løvlie, and Reason 2013; Wetter-Edman et al. 2014; Sangiorgi 2012; Clatworthy 2013; Jones 2013)

Effective use of communication tools during design processes has been regarded as an effective means to bridge the evidence based culture of the medical world with the working cultures, perspectives and languages of the other fields. Three-dimensional communication tools are here referred to as tangible tools and are defined as “material components used in participatory design activities” (E. B.-N. Sanders, Brandt, and Binder 2010). The use of tangible tools in co-creation workshops with diverse stakeholders has shown to support co-design by facilitating knowledge exchanges and understanding between participants from various fields. However, there is a lack of discourse in terms of what actually makes such tools successful, in other words, what designed attributes of tangible tools lead to successful outcomes.

Tangible tools (i.e. design games, artefacts, boundary objects, cultural probes) can facilitate the development of a common language, a shared understanding and a shared vision between diverse stakeholders. In addition, they are a means for service designers to intervene in complex contexts using design thinking (Buchanan 2014; Kimbell 2011; Kimbell 2012) and systemic design approaches (Sevaldson 2011; Sevaldson 2010). One aspect of tangible tools that seems to be important is the use of affordances and metaphors in tangible tools. These interrelated terms can offer great potential for enabling co-design processes through offering a means to represent and visualize abstract ideas or modes of thinking, as well as documenting and describing outcomes of co-design processes. According to Gibson (1979), affordances are the action possibilities of objects with reference to the physical condition of the user, while in Norman´s interpretation (2013), it is the perceived information with reference to the mental and perceptual capabilities of the user. Affordances are closely linked to metaphors which are beneficial in making abstract concepts tangible for the user, allowing them to more easily express and discuss topics through representations and associations.

As service design and design thinking have both been described as being highly empathic and user-centred, the two fields have also both been critiqued for excluding the more provocative and challenging aspects of design, such as aesthetic competence and critical perspectives (Akama 2009). In literature, tangible tools are often described as being successful because they were ´visually appealing´, ´they caught the attention of participants´, or ´triggered a playful atmosphere´ (Gaver, Dunne, and Pacenti 1999; Brandt 2011; Mattelmäki 2008; L. Sanders and Stappers 2013; Clatworthy, Oorschot, and Lindquister 2014; Buchenau and Suri 2000; L. Sanders and Stappers 2014). Such accounts support that the aesthetics and visual aspects of the tools were indeed successful, but say little about the design process and design choices that determined the final physical outcomes. This gives few insights to support designers in developing tangible tools, meaning the actual design of tools is often developed on a trial and error basis. Unsuccessful workshop interventions challenges the trust that service designers have built with participating stakeholders. There is therefore a need for a framework and design specifications to support designers in their process of designing successful tools for co-design in complex systems.

This contribution to the RSD6 symposium presents several examples of tangible tools that illustrate the use of affordances and metaphors, highlighting where design specifications for tangible tools are needed and where they could be beneficial. The examples are designed by the author as part of an ongoing research by design PhD focusing on how collaboration can be fostered in the development of healthcare services through affordances and metaphors in tangible tools for co-creation. Through describing the examples, this contribution proposes approaches to creating a scaffolding for designers to assist with the designing of tangible tools. This is expected to consist of design patterns of successful tangible tools, that could lead to the development of a pattern language of tools within service design. Furthermore, the contribution will elaborate on the aesthetic impact that tangible tools have on participants in co-creation workshops and explore what role designers´ aesthetic competence can play in the complex systems that affect citizens´ healthcare and wellness. 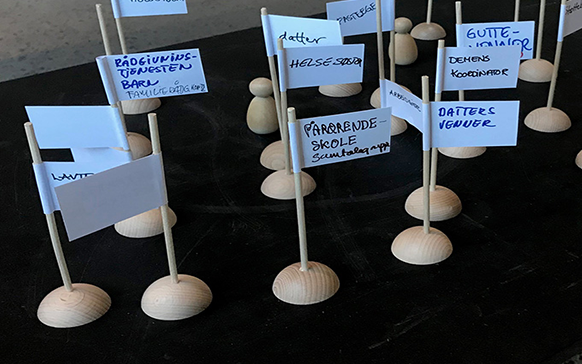