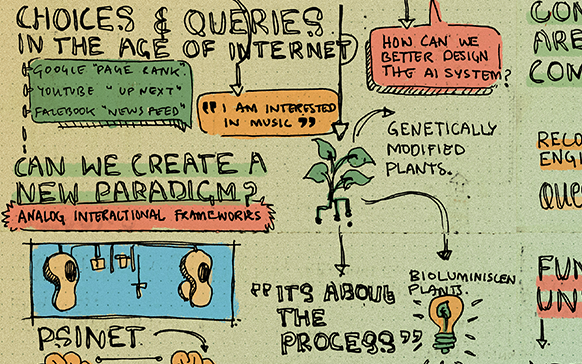 Reflections on possibilities for systemic design

RSD11 was hosted by the University of Brighton’s School of Architecture, Technology and Engineering (SoAD) and organised by the Radical Methodologies Research Group. The SoAD summary article is a reminder of the magnitude of the group’s vision, which “looked to question the emerging shape of systemic design as it becomes a distinct part of mainstream design discourse, and to challenge and pluralise its modes of working through developing its transdisciplinary connections.” (SoAD, 2022)

In an EcoLab article on RSD11, Joanna Boehnert (2022) observes, “Often this work includes a focus on justice-oriented design for sustainable transitions”. Indeed, Joanna’s framing describes what was intensely experienced throughout all sessions. Although scholarly work is at the root of the symposium, RSD11 felt more like a movement bringing together designers across a range of disciplines in a pluralistic community of academics and practitioners. Joanna’s article is a thoughtful round-up of RSD11 sessions that will be meaningful to people who joined sessions and those interested in discovering more about systemic design. She describes moving beyond affirmation to the tough questions as systemic design steps into a second decade with eyes open.

Josina Vink facilitated an intense fishbowl where tensions were discussed. One particularly troublesome issue that arose in this space and a problem that exists as real threat to both the justice-oriented design community and the sustainable design community, is the issue of appropriation (Boehnert, 2022).

The framing of justice-oriented design for sustainable transitions ran through the themes of keynote speakers in Joanna’s article, including Matilda Tham’s discovery of love and care.

Tham’s ‘care-okay’ was picked up by Francis Laleman in the Medium article, “Ten of the most mesmerising words buzzing in systemic design today” (Laleman, 2022). Sure to intrigue your inner etymologist, it’s worth reading the lively examination of each term – ablebodyism, aletheia, autoimmunity, boundary critique, care-okay, chronophobia, knowitallness, wishywashyness – and, Batesonian – which Francis squares nicely with systemic design.

Today, with the arrival and gradual development of systemic design as a field of its own, to say that Gregory Bateson is back on the scene would be an understatement. The recent #RSD11 systemic design symposium was a case in point — with its focus on provocations from the work of Gregory Bateson, its Bateson dialogues (organised by Bauhaus University’s Dulmini Perera), and its #NewMacy track, meant as a creative reprise of the legendary Macy Conferences in systems theory and cybernetics (1941–1960), in which Bateson, famously, was one of the original members of the core group. (Laleman, 2022)

Thanks to Dulmini Perera and the #NewMacy co-leads, anyone who didn’t have Batesonian in their vocabulary certainly does now, along with cybernetics and second-order cybernetics, the latter being an essential state of reflexivity, in which cyberneticians view themselves as part of the systems they observe and take part in. This concept reflects the widespread recognition of emic approaches across branches of science (Headland, 1990), for example, by Chantal Spencer (2022) in “Rethinking Participatory Design Research Methodologies”.

I discuss and share personal reflections on my experiences as a disabled woman in academia and the importance of Cripping my work. I will explore ways in which Crip culture can be assimilated into research practices to the benefit of the participants and the researcher. (Spencer, 2022)

As a #NewMacy studio, RSD11 tilted toward the transdisciplinary and piloted programmatic possibilities for systemic design events. Considering the definitions set out in the Library of Systemic Relations (Sevaldson, 2011), the collaboration is an opportunity to explore structural and thematic relations between cybernetics and systemic design and build social relations to support mutual goals of sustainable design. As a #NewMacy initiative, the co-leads autonomously created the studio content. More information is posted on the website, including this statement of purpose.

The purpose of #NewMacy is to catalyse conversations across disciplines, geographies, and generations. Such scope is demanded in order to design actionable responses to any of the many great challenges of our time — pandemics of biology and technology, racism and inequality, environment and economics. These are all challenges that have run out of control, a consequence of interactions that ricochet through physical, biological, and social domains, reinforcing their own spirals while causing or accelerating others. (#NewMacy, 2022)

The #NewMacy site functions as a cybernetics blog. Of relevance to those who followed this track are two articles on ontogenetic resilience, described by Eryk Salvaggio as “sustainably preserving a state of becoming” (2022a) and by Claudia Westermann as “the behaviour of cybernetics as ‘poiesis” (2022). These are just two from a collection of thoughtful posts from “Pandemic of ‘Today’s AI’” to “The Pavillion for Listening to Electric Mushrooms”.

Yes, mushrooms. Eryk linked “the internal communication signals from mushrooms into the circuitry of a modular analog synthesiser” (Salvaggio, 2022a) and gave us Worlding: Sympoietic Mycology, glimpsed in an impromptu session at RSD11 and described in detail by Eryk on Cybernetic Forests, “Mushrooms, Recursion and You” (Salvaggio, 2022b).

When the National Institute of Design (NID) in Ahmedabad, India, hosted RSD9, we were in a worldwide pandemic lockdown. Undaunted, the team, led by NID Ahmedabad Director Praveen Nahar and Sahil Thappa, who heads up the User-Centered Design Lab, moved RSD9 online – and it stands as the most attended RSD to date, with a programme that represented systemic design at an impressive international scale. There’s little doubt that subsequent symposia reflect the pluralistic approach taken at RSD9. This year NID responded to the call to expand possibilities of systemic design by hosting a paper track outside the BST-based hours, then expanded the RSD11-NID programme to include pop-ups – second presentations of workshops and activity sessions in IST hours – and a redux of the delightful NID virtual exhibition with a collection of this year’s maps (NID, 2022).

The collaborations with NID and #NewMacy have served as prototypes for RSD12, envisioned as a distributed event with multiple sites. The hub model was experienced as a way to convene across time zones, recognise international travel’s impact on the environment, and dig deep into systemic design’s transdisciplinary possibilities. At the Systemic Design Association’s General Assembly, Evan Barba proposed that Georgetown University coordinate RSD12 as a distributed network model where a handful of “hubs” or “nodes” act as regional hosts for RSD. The proposal was enthusiastically received and approved.

Part of the core thinking within the university’s Radical Methodologies Research Group, systemic design is a developing field of design practice that looks to address systemically complex challenges – such as social and ecological transformations and design for multistakeholder socio-technical systems such as healthcare. Drawing on conceptual and methodological resources from systems thinking (and other systems fields such as cybernetics and complexity), systemic designers have and are developing modes of working through those troubling situations where it is hard to act due to uncertain boundaries and conflicting criteria. (SoAD, 2022)

Featured image (above): A detail from the sketchnote of #NewMacy – Pandemic of the ‘New AI’. Courtesy of Javid Ali.