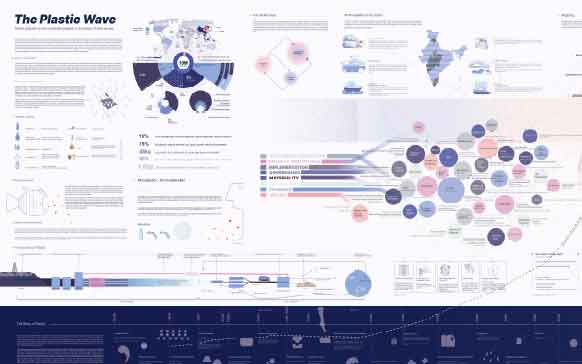 Plastic Wave – Plastic pollution is a result of who we are

The plastic wave has started forming an unavoidable loop from the depths of our oceans, island beaches to fishes ingesting it and landing into our plates in forms we can’t see. The problem of plastic pollution and managing waste, its impact on marine life and the ecosystem is one of the alarming issues of our times. Resolving it also requires the conjunction of different efforts to face this adversity. Overexploitation of non-renewable energy, losing hundreds of species to plastic debris, and looking ahead for more plastic than fish in the oceans by 2050 are major challenges we face right now. With the pace of events that we create to disturb the natural ecosystems, our footprint might be the last of all. The enormity of plastic pollution is not only a threat to the wildlife and the environment, but it is a fight between social construct and giant economies. Linearity of mind and models have profoundly influenced our behaviour, habits, and relationship with the planet. To tackle the problem of plastic pollution, the whole system must work parallelly in conjunction. Leverage points are critical in establishing the interventions that will also act as plugins. Our research and methodologies have helped build interconnections between multiple layers to reveal deeper insights towards framing the problem correctly and working towards a massive change for shifting our patterns towards a circular lifestyle. Consciousness and reflection, either from a choice perspective or a responsible managerial point, are what withholds closing the tap of the hazardous plastic flow down the river. Still, it’s our values that feed the loop. We believe that the solution lies in restoring our relationship with the planet, changing consumption patterns, feeling accountable for our actions, and finding congruence between our needs and desires. A wave has begun to conquer the plastic mountain, but will our efforts be enough?

We start by establishing key facts and figures (left) to engage and inform the enormity of plastic pollution. There is also an important mention of microplastic and how it is our invisible enemy. It assimilates to an understanding of the wicked problem. We see the problem from eight lenses (centre) and draw interconnections between relevant case studies, conversations, and visits. We arrive towards synthesis, forming under five heads focusing on the problem resulting from who we are. An understanding of desires vs empathy is also drawn above it. A reverse loop from the mapping takes you back to the facts to contrast to how our choices have led us where we are. There is constant storytelling (bottom) of plastic from its invention, benefits, and effects on our lifestyle. The linear flow is bent towards the end, forming a cyclic loop depicting the need to switch to circularity. This wave is also used as a metaphor. Inside the wave is the intervention space with a common goal of rethinking our relationship with the planet. Microplastic as a visual element is used at multiple places on the map to remind us of the problem.

Map: Plastic Wave – Plastic pollution is a result of who we are