The research team recently developed an innovative system with low environmental impact for the production of semi-rigid panels for thermal and acoustic insulation, obtained from recycled sheep’s wool, from Piemonte region (Cartonlana insulation panel). Starting from the previous work, a new semi-rigid panel has been produced, combining sheep wool with hemp te- chnical fibers (Fitness insulation panel). The researches activities have been developed by a multidisciplinary group, which includes a textile company, Davifil (owner of the Cartonlana patent), the Biella CNR ISMAC (specialized in macromolecules and the textile fibres), the Department of Architecture and Design – Politecnico di Torino (expert in low-environmental-impact building components), and Assocanapa, which promotes the cultivation and valorisation of hemp.

Both the sheep wool and the hemp used for the insulation panel production derive from agri-food systems and are wastes from already existing pro- duction chains. Wool comes from Piemonte region sheep breeding; it cannot be used in textile industry, due to its dark color and/or poor quality: fibers are too thick, and irregular length also. Sheep wool is usually washed and dried, but still contains plant debris trapped amongst fibers. As for hemp, treatments on the raw wool are reduced to a minimum, in order to minimize the energy consumption for the production of the panels.

The panels have two main innovative features: unlike the already existing hemp and wool insulation mats, they are semi-rigid products and they has a low environmental impact, as shown by the Life Cycle Assessment. Their stiffness comes from the production process, where the keratin of wool fi- bers works as a binding matrix and constitutes a rigid structure. The panels have been tested to measure their thermal and acoustic absorption, both in the laboratory and in real use conditions, demonstrating excellent perfor- mance, in line with the natural products currently on the market. In parti- cular, the laboratory measurements showed a thermal conductivity of 0,041 W/mK for Cartonlana and 0,040 W/mK for Fitness. As for the sound ab- sorption coefficient, Fitness panels have a better performance (aw=0,75 MH compared to aw=0,55 MH of Cartonlana).

Starting from that experiences, a further phase of experimentation of the production process of insulating materials is being implemented, in order to improve the degree of adaptability to the real availability of wasted natu- ral fibers from local agri-food systems. The objective is to create and test an “open recipe” for insulation panels production, able to keep as low as possible the environmental impact, thanks to the adaptive use of natural fibers avai- lable in a specific context and time.

– a “charge”, made up of waste materials and by-products of textile and agri-food chains; natural fibers that are not used on the market, but also ar- tificial waste materials.

In the “open recipe” the binding matrix (sheep wool) is mixed with different quantities and proportions of the “charge”, fixing the appropriate rules and variables to keep the thermal and acoustic performances suitable for the use in building sector as insulations.

The “charge”, a selection based on “low environmental impact” requirements

With the aim of keeping the environmental impact related to the pro- duction of the panels low and with a view to circular economy, it has been suggested the use, as “charge” selected with the intent to explore the possi- bility of obtaining panels with different performances.

For the “charges” selections, to be tested in the new thermal-acoustic insu- lation panels, the research group defined some principles, in order to keep as low as possible the environmental impact of the insulation panel. The selection was oriented to:

– natural materials, in order to facilitate the end-of-life disposal, assuming, ultimately, a thermo- valorization as biomass scenario;
– preferably fibrous materials, or however easily aggregable with wool fi- bers, in order to produce panels with an homogeneous composition.

Considering these requirements, the research group selected the following materials as possible alternatives: corn bracts, dried bean plant – referring to the Piedmont region territory – and almonds shells – referring to Puglia region. Therefore a production-chain study and an availability scenario, in parallel to the production of panel specimens, have been developed.

Corn bracts can be considered a by-product of corn cultivation harvesting and are single sheath leaves, protecting the corn female inflorescence, an ear that grows sideways to the stem, at the height of the 6-7th node below the male inflorescence (Università di Sassari, Dipartimento di Agraria). Corn plants generally present a single ear 10 – 20 long, but occasionally can rea- ch 42 cm longness, and 3– 5 cm large (Assomais), carrying about 1000 dry one-seeded fruit, the caryopsis, each. The female inflorescence is supported by a peduncle generating the bracts, generally in number of 5-6 each flower and representing about 7% by weight of a mature whole corn plant.

Corn is highly widespread in North Italy, while Piedmont is one of the four regions with the highest corn production in Italy, with a production area of about 148,855 ha (ISTAT 2016) and a 1,441.5 thousands tons of crop yield, despite suffering a sensible decrease of cultivation area of about 33%, after 2014. In Italy, corn harvesting happens in September-October, generally using a combine harvester machine. A square meter corn plantation area is likely to make about 6-8 corn ears, about 30 – 48 bracts, 40 – 65 t/ha of chopped plant, in north Italy. As a corn plantation by-product, bracts have quite no use, excepting, together with other corn residues, as biomass and boilers fuel. Moreover the large widespread on the regional area, its fibrous nature and low protein content, make it a potentially interesting product to be tested as a “charge” for the panels recipe.

Almond is a deciduous tree of medium height (from 5 to 7 metres in its adul- thood) and slow rate of growth but very long-lived. It generally goes into production around the age of 5 and achieves maximum productivity no ear- lier than 20 years of age. It well tolerates drought and high temperatures in summer and adapts to dry and poor soils. Its fruit is an ovoid and elon- gated drupe, with a fleshy, light green coloured and hairy (sometimes also glabrous) exocarp (mallo), which detaches when ripe. The endocarp (shell) is woody, whose consistency can be hard or brittle.

Inside the shell are contained seeds (almonds) which are utilized mainly by the confectionery industry and, partly, consumed as dried fruits. The harvesting period goes from the end of August to the end of September, de- pending on pedoclimatic conditions and cultivar, when the hull is comple- tely open and almost detached from the shell. Currently, more than 93% of national production comes from two regions: Sicily (60%) and Puglia (33%). The total amount of the national production of shell fruits is about 79,600 tons (source Istat, year 2017). Given a yield of 25-30%, remain about 55,000- 60,000 tons of non-edible parts that are merely used in cosmetic and soap industry or become fuel that could be employed, instead, as “charge” for ma- king panels.

The opportunity of using the dried bean plant comes from the great availa- bility of that material in the Piedmont region, where 23% of the beans culti- vated area in Italy is concentrated (ISTAT 2010). In particular, the province of Cuneo can be considered the most suitable area for designing panels be- cause both sheep wool and dried bean plants are widely available. In that territory the beans production is also identified by the IGP denomination “Fagiolo di Cuneo” (Protected Geographical Identification). Moreover, refer- ring to the IGP denomination, another research group from Department of Architecture and Design has recently developed a production-chain and valorisation scenario, thanks to the project EN.FA.SI.2, funded by Piedmont Region.

The beans are harvested by hand or through threshing in different phases during the autumn season. In the threshing-harvest, the thresher collects the beans, leaving the rest of the plant (stem, leaves pods) in the field, where it completes its drying process. The plant is rarely harvested, more often it is turned in the field, with the risk of soil contamination by parasites. In few cases is used as cattle litter (with lower yield than straw) or burned as biomass to produce energy. The research group propose to use the entire dry plant for the production of the panels as aggregate charge from sheep’s wool. The production of the sheep wool and dried bean plant panel speci- men gave a positive result, highlighting, however, some difficulties in sepa- rating the dried plant fibres. 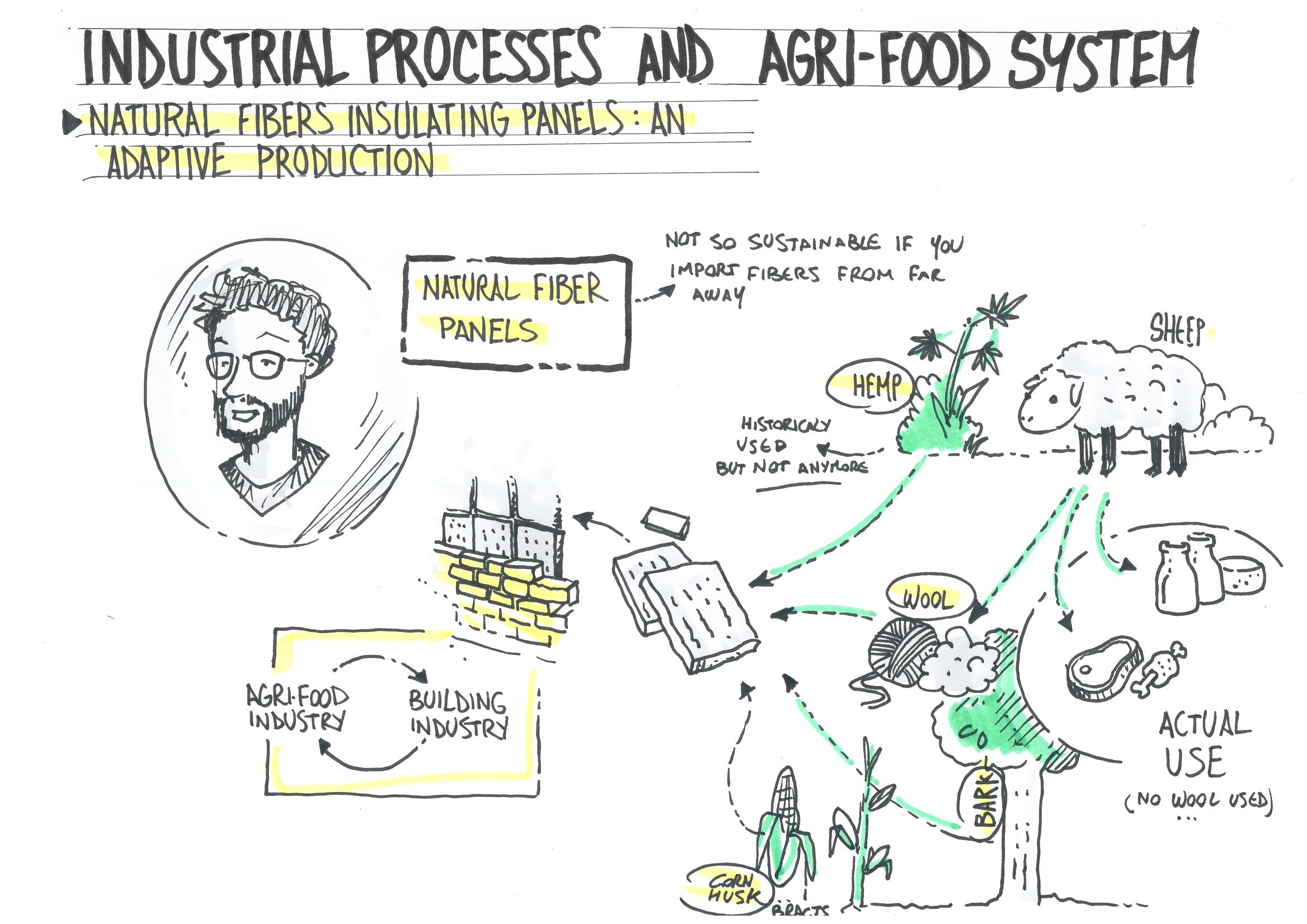