Narrative and Value: Authorship in the story of money

This project was born from an earlier study exploring the bitcoin and blockchain community in Toronto. In that research, a sentiment kept coming up in the expert interviews; someone exploring these new blockchain-based monetary technologies would articulate something along the lines of “money is valuable because we agree it is valuable”, as a quickly visited precursor to discussing their perspective on some aspect of Fintech or new finance.

This study delves deeper into the idea that the value of money is sourced from a collective agreement that it is valuable. The study begins by framing that collective agreement as a narrative, or more precisely, as an “effective story”, defined by Yuval Noah Harari as “a story that many people believe.”
Using a hybrid model that combines Sohail Inayatullah’s 4-level, U-shaped Causal Layered Analysis (litany, system, worldview, myth) and a 4-level Computer Operating system model (user, application, OS, hardware) the project explores what that effective story/collective agreement is “about” towards an understanding of the values held by, or noticeably absent from, the most readily used monetary technology in the world; debt at interest, issued by a central authority, backed by the laws of a nation.

The combination of the CLA and a Computer Operating System model allowed for the leveraging of an idea from Douglas Rushkoff that compares the current debt-based financial system to a computer operating system with these attributes:

• Running in the background impacting everything in the system.
• In serious need of an upgrade. And;
• Its widespread use is perhaps concealing the possibility of other monetary technology solutions. Debt at interest is the monetary water we’re swimming in.

Connecting the worldview level in the CLA to the OS level in a computer operating system allowed, from the CLA perspective, a way to frame a worldview as a kind of technology or tool; a software or algorithm. From the computer operating system perspective, the hybrid combination allowed for a framing of software as a worldview or ideology; an effective story.
Within the study’s wider provocation of “How might we get really rich?”, the study then asks, how is the story of money, (the shared agreement of its value) created in its telling? Who is authoring this story? Where and how does the “telling” of the story of money take place? This framing suggests the monetized financial transaction as the base from which the story of the common currency is authored, as well as where the manifested value of that story is realized. The transaction is addressed as a tangible site to design for specific experiences, the attributes of which may, over time and exchange, correlate to the more preferable values we’d like money to hold.

In search of a framework to explore which attributes might be designed towards within the financial transaction (any transaction where two parties are using debt-based currency), the study looked at the arena of self-esteem. A literary review on the subject yielded these ideas:

• It is an internal valuation based on the relative levels of specific attributes including honesty, responsibility, integrity, trust, and others. The coherence or synergy of those attributes, as they are internally evaluated, are the self-esteem of a person.
• It is at a level of the “deepest vision of competence and worth”. It is a
130 |
truth, (perhaps concealed to the very person making the valuation), beneath any self-delusion.
• It is a human need, on the level of oxygen, and humans will attempt to fulfilll the need. The evaluation is made one way or another and if not through true sources then through false sources.
• If self-esteem is attempted to be fulfilled through false sources it creates an addictive cycle where actual self-esteem deteriorates and addiction dynamics intensify. The study looks at outside validation as one of these false sources, and money’s part to play in this dynamic.

The project considers self-esteem as a kind of asset, the building and ownership of which is the bedrock upon which value can be created. In the context of design, Bruce Mau articulates a similar idea with his thoughts on the studio and refers to it as “the project where all the other projects are created.”
How is this work a new way to communicate an economic system? The study brings up the question, how might the financial transaction be an engine for self- esteem? How might we consider the transaction itself as a venue to build self-esteem by increasing, by design, the propensity to experience and increase the components of the internal evaluation that is self-esteem. In this pursuit over time, the currency (or currencies) used to facilitate the financial transaction may come to hold alternative value(s).

Nathanial Branden frames the importance of self-esteem in this way: “We have reached a moment in history when self-esteem, which has always been a supremely important psychological need, has become an urgent economic need – the attribute imperative for adaptiveness to an increasingly complex, challenging, and competitive world.”
The solution model frames each of the individual experiences within the myriad of financial transactions as a piece of the source material in the story of money. This framing allows for a tangible place to design towards bringing more consciousness and alternative value(s) to the abstracted concept of value that connects to the common, debt-based currency. Over time and transactions, the hope is the iterative shifting of the monetary narrative from one of scarcity and insecurity to one more “about” an esteemed flourishing, one transactional incident at a time.

The possibility of a re-written story means a revised set of values held by the common currency. The widespread monoculture of money might then be a catalyst for change, as opposed to an entrenching tool for the status quo, as it spreads revised values, authored with increased intention and attention from more decentralized sources at the transaction level.

Narrative and Value: Authorship in the Story of Money from RSD7 Symposium 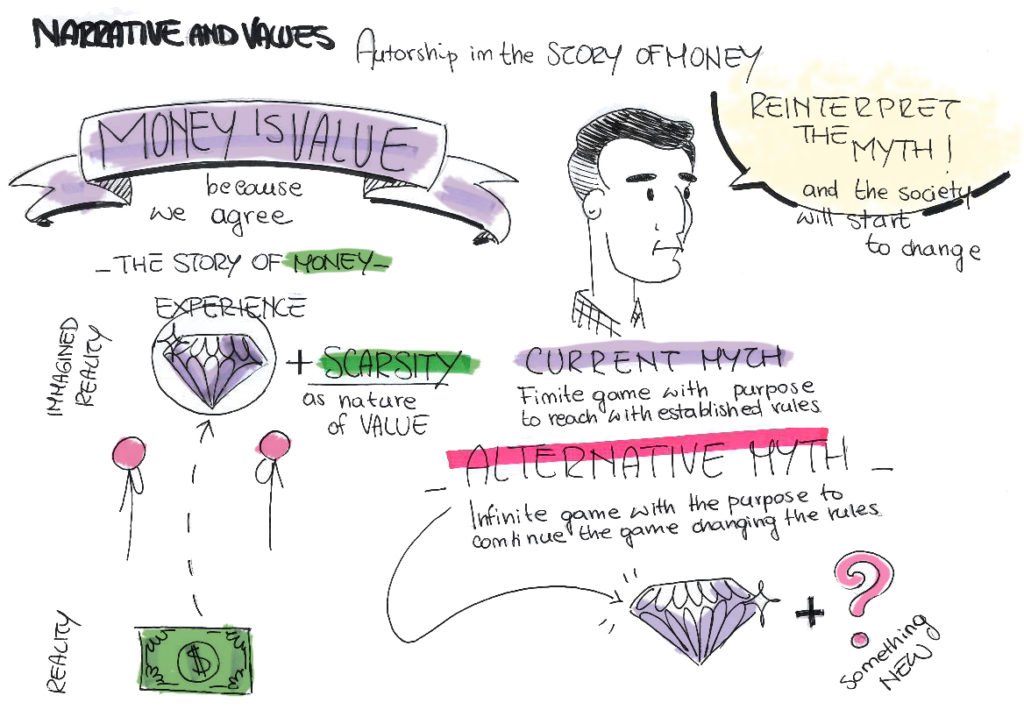