The proposed analysis is conducted in the framework of the theory of complex systems (Telfner, Casadio, 2003): following the paradigm of complexity, suggested by the systemic approach, means in fact making interact and analyzing the relationships between open systems, in this case the biological systems, from which the idea of circular production processes has also been borrowed (Stahel, 1982; Braungart, Mc Donough, 2003), and the economic-social ones (Georgescu-Roegen, 2003), since «never as today the link between ecological sustainability and economic-social sustainability has became clear “(Bonaiuti, 2003, p.42).

The first objective is therefore to create, starting from the data of the app Mercato Circolare, a photograph of the Italian economic-social system linked to the circular economy, highlighting its actors, roles and relationships. Photography becomes the basis of a comparison between the characteristics of this system and those of biological systems, verifying the plausibility of the anchoring of some principles of the economic-social system to the biological ones. To give just a few examples: presence of a plurality of ends and not maximization of a single variable; presence of a combination of competitive behaviors (in expansion contexts) and cooperative (in equilibrium contexts); impossibility of the part to control everything; endowment of a feedback system.

The second objective is to investigate whether it is possible to activate and sustain territorial synergies aimed at defining districts (Becattini, 2000) and network systems capable of transforming a series of problems typical of the national productive system into economic, environmental and social opportunities.
Assuming that the Italian circular economy system can have the characteristics of a complex system, since the complexity of a system is given by the architectural configuration that assumes the whole, it is inevitable to deal with the network category. In particular, the research intends to verify whether, as for complex systems, the Italian circular economy system also presents itself as a phenomenon endowed with a combination of multiplicity and autonomy (Telfner, Casadio, 2003). Autonomy is what makes such self-referential or autopoietic systems (Maturana, Varela, 1985) so that their primary functioning is moved towards self-renewal. In the same way, for the districts and circular socio-economic systems, one wonders whether it is possible, starting from what the territory offers, following a cascade model (Pauli, 2015) and exploiting the principles of physics, satisfying the primary needs locals.
The model of autopoiesis also becomes useful to describe the dynamics between node and network. In fact, an autopoietic system is not independent from the external environment: it speaks, rather, of an operational closure understood as the ability to select the inputs that arrive externally and therefore to fully control its internal organization, ie the invariant part, to protect its own identity.

Methodologically, the research develops through the elaboration of questionnaires, site visits, internet research and bibliography, identifying four sectors of analysis, starting from the app’s structure: businesses, products, civil society and cultural events. Mercato Circolare already records almost 400 activities (95% in Italy), of which 53% are businesses, 18% products, 14% cultural events and 15% institutions or experiences of active citizenship.
For all the sectors of analysis, except for cultural events, the same fields are investigated: the start year, the legal nature of the entity, the flow of the supSystemic
analysis of the experiences of circular economy in Italy through an app
ply chain and traceability, the business model and the relative comparison with the reference markets, the value generated in environmental, social and cultural terms, and finally the motivation.
As regards the supply chain flow, for each company we intend to create a visualization of flows and production processes: design (materials and production); supply; logistics; sale; use; and end of life. In this way we intend to visualize the traceability of the process / product. The purpose of traceability is to offer an identity to the goods / service by making known the history and the subjects who participated in its transformation and realization. The design of the flow of the supply chain allows, subsequently, to identify the reality being analyzed with one or more types of economic models of circular economy (Lacy, Rutqvust, Lamonica, 2016): circular supply chain from the beginning; recovery, reuse and recycling of resources; lengthening of the product life; sharing platforms, and produced as a service.

For the evaluation of the value generated we intend to focus on environmental value, through the formulation of a multiple indicator of circularity, as suggested also by the Public Consultation Document prepared by the Ministry of the Environment in collaboration with the Ministry of Economic Development (July 2017). In this way it is possible to obtain a circularity balance related to an organization, a product, a service, or territory, which guarantees greater transparency, enhancing virtuous actions and unmasking “green washing” operations. With this in mind, it is important not only to highlight the real value generated in environmental terms, but also in social (inclusion) and cultural terms (promotion of the common good), thus deepening the theme of the motivation behind the start of an enterprise, product, service, or event inspired by the principles of circular economy.

The category of cultural events, on the other hand, is analyzed, also through the time and nature variables of the organizing body, and then through an analysis of the cultural offer proposed in terms of audience development and capacity building in relation to the circular economy issues.
In addition to the four sectors mentioned above, always taking advantage of the app data, it is considered interesting to explore a fifth category of analysis, consumers, made up of users of the app. Once a statistically significant number has been reached, it is intended to delve into three issues. The first two concern the way in which the app became known and the verification of previous knowledge of what the circular economy was. This is to verify the ability of the app to spread and expand in non-homologous contexts to its cultural reference domain. The third question is related to the effectiveness of the app: how much is actually perceived as useful by the user and how much it contributes to directing expenditure towards the circular economy.

Mapping the Circle. Systemic analysis of the experiences of circular economy in Italy through an app from RSD7 Symposium 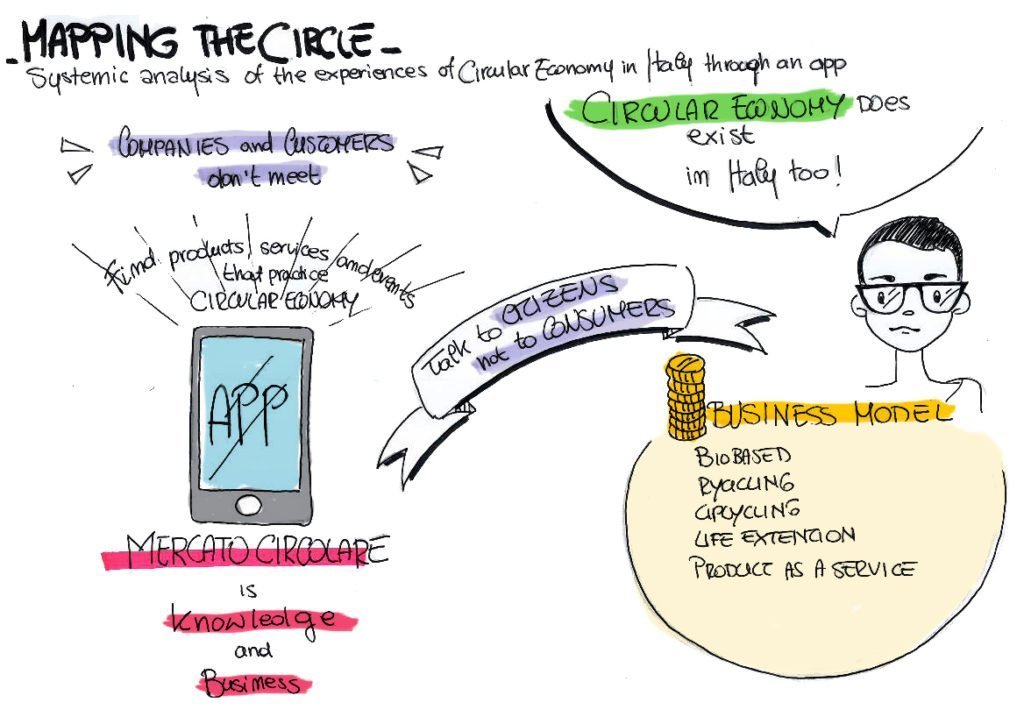