Integration of multiple approaches into the social lab practice. A case study from a social and public innovation lab in new Brunswick, Canada.

New Brunswick is expected to have the worst economic growth out of the ten provinces in Canada in 2018 (Jones 2018). Passed over by large resource projects and hit hard by the collapse of the cod fishery in the early 1990s, the province is currently experiencing a wide range of societal and demographic challenges as a result. At the same time, New Brunswick’s population is both aging and in decline. The first wave of Baby Boomers are retiring and there aren’t enough people to fill the jobs that will be coming available. This has triggered the province to undertake an unprecedented immigration challenge to offset the coming workforce losses. This demographic trend is being witnessed in rural areas across the developed world with ever-declining birth rates leading to population decline.

The recent uptake of public sector innovation labs by multiple jurisdictions across Canada raises the question of how to integrate their findings into the milieu of traditional policy development (McGann, Blomkamp, and Lewis 2018; Westley et al. 2015). Bringing people together and holding productive conversations is at the heart of how social labs deliver value. To do this effectively various practices from the methodology known as The Art of Hosting and Harvesting Conversations that Matter (AoH) have been employed by New Brunswick’s Social and Public

This proposed paper will look at how engaging multiple stakeholders – including public servants – with a variety of tools in a participatory process can improve outcomes in policy development across New Brunswick. Engaging non-traditional policy actors in the design process requires strategies taken from a variety of disciplines. NouLAB uses tools from AoH as well as Theory U, Human-Centred Design, Systems Thinking, Google Sprint and Social Labs methods in order to build lab experiences and to frame the issue at hand (Hassan 2014; Scharmer 2009). Lessons from this process can potentially be applied across jurisdictions worldwide.

NouLAB, New Brunswick’s Social and Public Innovation Lab was developed out of the need for new approaches to tackle complex, systemic challenges. NouLAB is housed under the Pond-Deshpande Centre at the University of New Brunswick, giving it an outsider view to government and allowing it to ‘hold disruptive potential’ (Tõnurist et al. 2017, 16). Across the province, challenges ranging from nursing shortages, rural revitalization, housing for individuals with complex needs, poverty reduction, and others have been undertaken by the NouLAB facilitation team.

In September 2017 the first multi-year standing lab undertaken by NouLAB was launched on the topic of Economic Immigration (“Economic Immigration Lab || NouLAB”). The first cycle lasted four months and produced eight prototypes, each with unique contributions to answering the question of ‘How might we attract, welcome and retain newcomers to contribute to the New Brunswick economy?’ The second cycle, completed in mid-April 2018, focused in on the themes of employer support and newcomer integration. For this cycle, a five-day Google Sprint-inspired format was taken. Teams came in pre-formed and with an issue related to immigration. The implementation of this Google-developed format on social issues presented an opportunity for learning for the NouLAB team. Overlaying the skills of Art of Hosting, Systems Thinking, Theory U and more, teams were able to frame their problem, develop a prototype with input across sectors and test it on users within five days.

These two cycles are now complete and the tracking of the prototypes is underway. Using a developmental evaluation approach to determine the experience of the participants and the success of the prototypes, the NouLAB team aims to identify the strengths and weaknesses of the hybrid approach that constitutes their social lab practice (Patton 2010). The facilitators learning curve to establish group norms, support diverse participation, identify power and privilege, and work towards agreed-upon objectives within teams are topics that have significant importance to the field of social labs (Quick and Sandfort 2014).

Of specific interest is how public policy is being influenced by the government employees’ learning and capacity building within the lab. The personal transformation journey has been identified as the biggest leverage point to change the system. In accordance with Theory U’s Iceberg Model of systems change (Scharmer 2009), values and beliefs are where change can be most easily impacted by individuals in complex systems. This change is tracked through the new relationships formed in lab processes and multi-sectoral teams that continue beyond formal lab engagements and workshops. Surveys and reports to track changes through time are carefully maintained through NouLAB’s evaluation process.

Our paper will discuss: the disruptive potential of NouLAB as a Public and Social Innovation Lab, situated as a programme of the Pond Deshpande Centre at UNB, the role of participatory and reflective practices and the transformative journey of the individual as paramount to the process of systems change, and our learnings from the establishment of NouLAB’s hybrid approach to running a Social Lab.

Integration of multiple approaches into the Social Lab practice. A case study from a Social and Public Innovation Lab in New Brunswick, Canada. from RSD7 Symposium 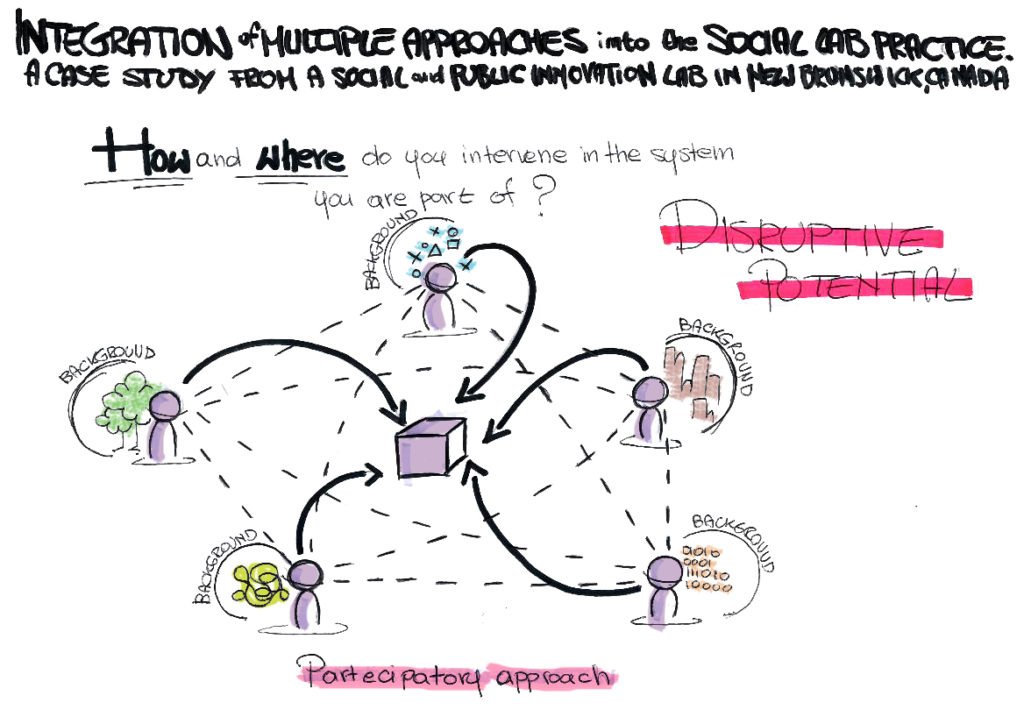