@Home in Transition: Encouraging asylum seekers towards more self-driven approaches to navigate the unknown they are surrounded with

Oslo School of Architecture and Design

Welcome and feel yourself @Home in transition.

This project is the story of tackling a common affliction today which brought two migrant girls from Iran to each other. They shared their backgrounds, hopes, pains and skills together, forming the project which was not only a master diploma but a real-life concern for them both.

This diploma project is meant to be the first pilot of a co-development concept in transition (elaborated inside the report) which happened in Norway at the Refstad Transit reception centre in Oslo, during winter-spring, 2018.

Despite the differences among reception centres around the world, they carry some similarities (Mouzourakis & Taylor, 2016), which enabled the project to extend its horizons beyond a contextualized student diploma. Consequently, the outcomes of this first pilot in Norway are both specifically designed for Refstad and also for the general context of transition around the world. The designed actions and tools are generalizable and carry general values which can be extracted as core materials to adapt to any other asylum and refugee centres around the world.

The project is following the concept of Co-designing Actions and Facilitating Discussions In Transition (Peter Checkland & John Poulter, 2006) which affords the possibility to learn through changing the system with its own footprint. It is not about a singular or multiple problem-solving projects, but about working with a situation rather than defining problems to solve. (Denis Loveridge, 2008)

The project aims to create a different state of mind within the context of transition and influencing the social system with participatory approaches as a fundamental element of dignified reception. By capacity building and raising self-awareness (NORCAP, 2016), the project is meant to motivate the asylum seekers to recall their competencies and wishes towards self-efficacy which affect every area of human endeavour by determining the beliefs a person holds regarding their power to affect situations.

Consequently, the process of recalling, planning and taking collective actions based on available resources inside the reception centre, builds dignity, self-esteem and self-reliance among people. Such approaches could lift mitigating tensions and conflict in the reception facility and build bridges between different groups.
In addition, the inhabitants of each centre would co-develop towards a self-initiated future based on their abilities and hopes. This achievement will also remove the false hope of necessarily ending up in the host country and enrich their abilities to bring them broader horizons regardless of the answer they will get from the authorities.

Fields of the @Home project

With a cross-disciplinary approach, this design diploma project is being held within different design disciplines simultaneously to bring a combination of their values to the humanitarian context.
Among the involved design fields:

Systems Oriented Design: The emergence and development of a designerly approach to address complexity. (Sevaldson 2013 – www.systemsorienteddesign.net, 2009)

Participatory Design and Co-design: as an approach attempting to actively involve all stakeholders (e.g. employees, partners, customers, citizens, end-users) in the design process to help ensure the result meets their needs and is usable (Simonsen & Robertson, 2013).

Service Design: as a design approach to improve the quality of different actors’ interaction and involvement by planning and organizing people, infrastructure, communication and material components of a service. (Brown & Wyatt, 2010)

Therefore, in this project, tools of Systems oriented design will provide a holistic view of the complexity of the field. “Service Design” tools and approaches help the designer to go into details and design actions based on the target groups’ needs. Co-design tools will facilitate discussions and collaborations among the designers and target groups. Together, these components benefit from the ideations within the transition design field.

The theme of the @Home project

Today, 80 million people are displaced and yet 28,300 people a day are forced to flee their home due to conflict and persecution. On the other hand, the world population is growing and this growth will not be among white and rich people. Therefore, the pressure on the borders will raise and continue over the next years. (“UNHCR – Figures at a Glance,” n.d.)

However, 2018 is considered as the down period with less arrival for most of the countries including Norway. Consequently, less resource dedication to emergency responses could lead to saving time and prioritizing development approaches/programs, enabling proper preparation for upcoming challenges. Projects with engaging development capacity management in this period could bring up different scaled local solutions which would empower self-driven approaches towards the problematics. Among them, frustration due to long waiting periods, pacification of the asylum seekers, self-loss and psychosocial health issues could be mentioned.

Followed by the context-specific local solutions in countries with less emergency status, approaches and extracted materials/outcomes could be patterned and implemented as several ensuring pilots in other countries as well.

For humanitarian authorities who are engaged with providing services and resources for vulnerable people, there is the priority of encouraging solutions towards promoting self-efficacy within the reception centers to enable courses of action required to deal with prospective situations. Consequently, an individual will be empowered to exhibit coping behavior and sustained efforts in the face of obstacles. This also leads to better integration and active engagement towards the living specifications of the context of resettlement.

Context of the project

In particular, this project is focusing on the context of Transition, such as reception centres where it is even more important for refugees and asylum seekers to consider integration measures intertwined with reception, even in the early stages and with (despite of) the notion that not everybody will be granted asylum. (Bergtora Sandvik, Fladvad Nielsen, Brita Fladvad Nielsen, & Gabrielsen Jumbert, 2016)

Due to the constraints in the transit reception centres and their “military protection atmosphere”, (Balasubramaniam Venkatasamy – Refstad camp manager), as well as asylum regulations, inhabitants’ lifestyle is limited to daily basic needs and long frustrating waiting period which provides lots of issues with psychosocial health and tension. (Based on our field studies & resources)

@Home in Transition. Encouraging asylum seekers towards more self-driven approaches to navigate the unknown they are surrounded with. from RSD7 Symposium 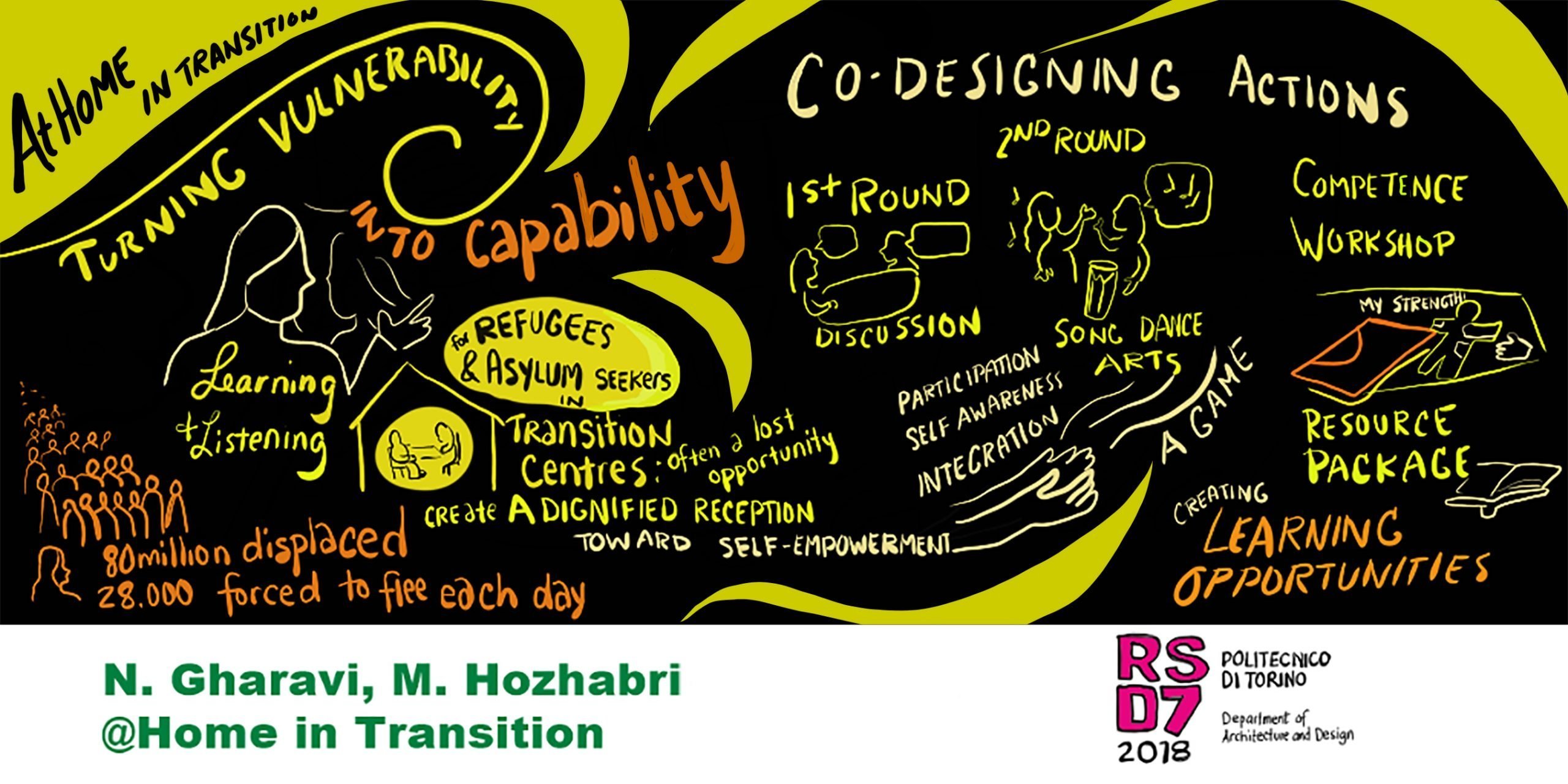