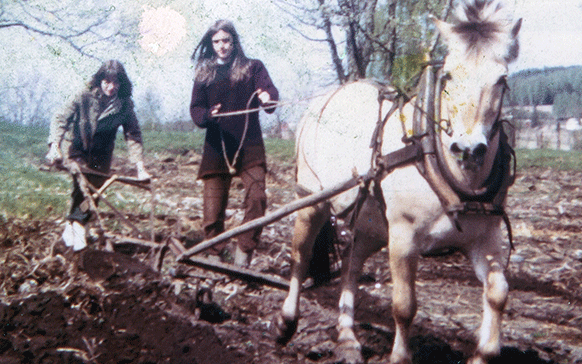 Birger and Tone ploughing with horse in 1970

There is no doubt that the Hippie movement changed western societies dramatically. For us who experienced the change, it was a personal fight for liberation as well as a cultural change of atmosphere in society.

This is a suggestion for a discussion and not an attempt to provide answers. In any case, the Hippie movement induced cultural change through the use of symbols and signals (clothing, hairstyle, music) the denial of the establishment to induce a softer kinder society (make love, not war) and counter-cultural action (the use of drugs and protests) and Rejection of established reality (anti-science, alternative ways of growing food, mystical practices, embracement of eastern philosophies and practices like meditation).

At its best, the movement became home to many displaced and miss-fitted individuals and it crossed religions, race gender and social backgrounds.

Despite its impact on western society there where many moves that did eventually destroy the movement. One issue is that it became so saturated that it was embraced by the system it tried to replace. Another thing was that the initially soft and experience focussed drug experiments were replaced by cynical mafias with hard drugs especially amphetamine that flushed the alternative movement.

It is obvious that there were many forces at play. I intend to initiate the discussion over three steps:

1) A short presentation of the issue
2) A short discussion bringing up sources and themes
3) A short gigamapping session starting to mapping out the forces at play.

It is my intention to collect this and compile it into systemic analyses of the hippie movement. This seems important now when western society is shaking and all kind of undemocratic and aggressive forces are at play. We need to better understand how bottom-up change can happen. The use of cultural expression was crucial in the Hippie movement and is probably underrated in our systemic approaches today.