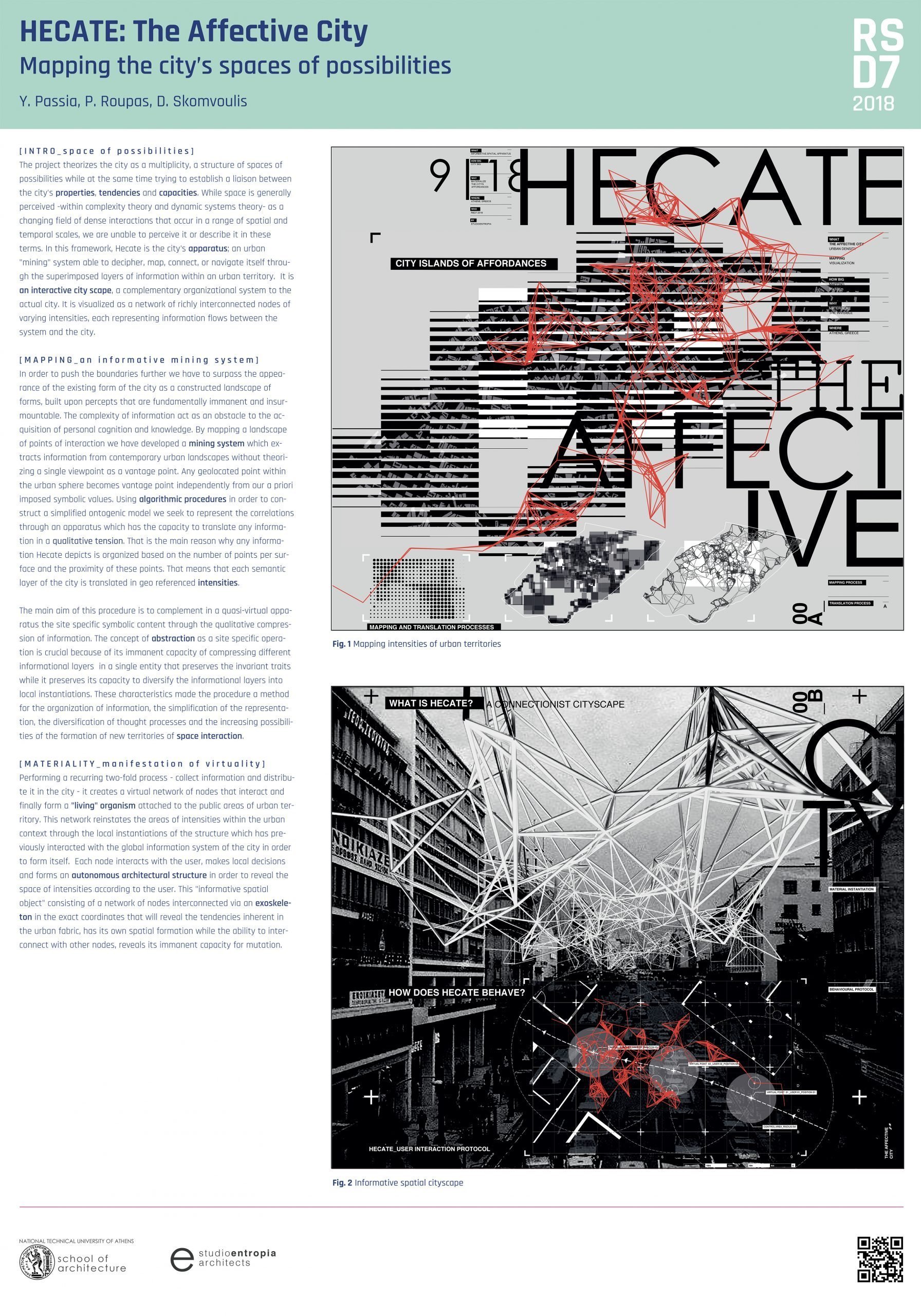 HECATE – The Affective City: Mapping the city’s spaces of possibilities

INTRO: SPACE OF POSSIBILITIES The project theorizes the city as a multiplicity, a structure of spaces of possibilities while at the same time trying to establish a liaison between the city’s properties, tendencies and capacities. While space is generally perceived – within complexity theory and dynamic systems theory – as a changing field of dense interactions that occur in a range of spatial and temporal scales, we are unable to perceive it or describe it in these terms. In this framework, Hecate is the city’s apparatus; an urban “mining” system able to decipher, map, connect, or navigate itself through the superimposed layers of information within an urban territory. It is an interactive city scape, a complementary organizational system to the actual city. It is visualized as a network of richly interconnected nodes of varying intensities, each representing information flows between the system and the city. MAPPING: AN INFORMATIVE MINING SYSTEM In order to push the boundaries further we have to surpass the appearance of the existing form of the city as a constructed landscape of forms, built upon percepts that are fundamentally immanent and insurmountable. The complexity of information act as an obstacle to the acquisition of personal cognition and knowledge. By mapping a landscape of points of interaction we have developed a mining system which extracts information from contemporary urban landscapes without theorizing a single viewpoint as a vantage point. Any geolocated point within the urban sphere becomes vantage point independently from our a priori imposed symbolic values. Using algorithmic procedures in order to construct a simplified ontogenic model we seek to represent the correlations through an apparatus which has the capacity to translate any information in a qualitative tension. That is the main reason why any information Hecate depicts is organized based on the number of points per surface and the proximity of these points. That means that each semantic layer of the city is translated in geo referenced intensities. The main aim of this procedure is to complement in a quasi-virtual apparatus the site specific symbolic content through the qualitative compression of information. The concept of abstraction as a site specific operation is crucial because of its immanent capacity of compressing different informational layers in a single entity that preserves the invariant traits while it preserves its capacity to diversify the informational layers into local instantiations. These characteristics made the procedure a method for the organization of information, the simplification of the representation, the diversification of thought processes and the increasing possibilities of the formation of new territories of space interaction. MATERIALITY: MANIFESTATION OF VIRTUALITY Performing a recurring two-fold process – collect information and distribute it in the city – it creates a virtual network of nodes that interact and finally form a “living” organism attached to the public areas of urban territory. This network reinstates the areas of intensities within the urban context through the local instantiations of the structure which has previously interacted with the global information system of the city in order to form itself. Each node interacts with the user, makes local decisions and forms an autonomous architectural structure in order to reveal the space of intensities according to the user. This “informative spatial object” consisting of a network of nodes interconnected via an exoskeleton in the exact coordinates that will reveal the tendencies inherent in the urban fabric, has its own spatial formation while the ability to interconnect with other nodes, reveals its immanent capacity for mutation.