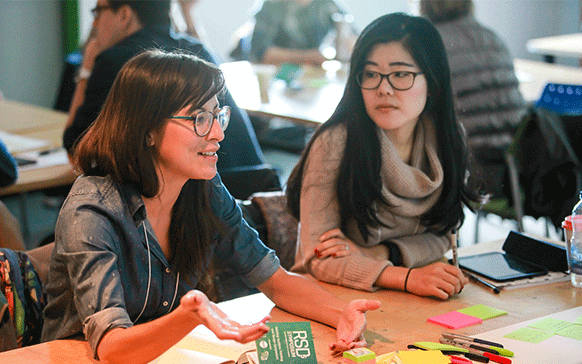 As in every RSD, Birger Sevaldson introduces Gigamapping methods in a hands-on workshop. This year with Marie Davidova, Birger and Marie teach the basics of Gigamapping to a level where you can start using this simple but rich technique on your own.

The content of the workshop includes an introduction lecture and 3 types of maps:

To engage with a specific case domain, Marie Davidova incorporates ideas from Performance-Oriented Design as an integrated architecture that reacts to its environment. In the time of extreme conditions of climatic change, we need to generate environment friendly as well as habitable environments that can gain from previous generations developed in oriental cultures. A driver for performance might be the resettlement of climate and other refugees.

By now, Canada has accepted 24,640 Syrian refugees. Canada has a very diverse climate with temperatures in some interior locations occasionally exceeding 40 °C between the coasts in summer, while winters, particularly in the interior and Prairie provinces with a continental climate, can drop below -40 °C. Climatic changes are already evident in Canada and drought; reduced quality of surface waters; a higher incidence of vector-borne diseases; more frequent heatwaves resulting in reduced air quality and high human discomfort in urban centres; and an increase in storm surge flooding in coastal regions are anticipated (Richardson, 2010).

Are there options to deal with such conditions in the built environment?