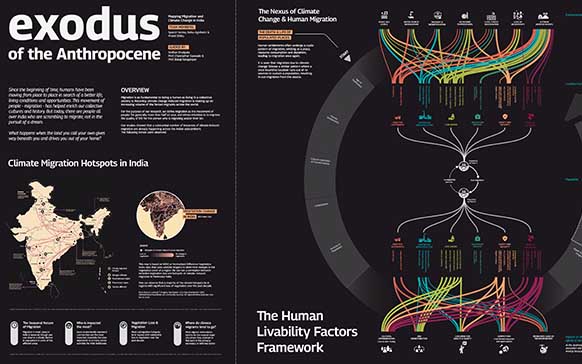 Exodus and the Anthropocene: Tracing climate-change-induced migration in India -230

For thousands of years humans have concentrated in a surprisingly narrow subset of Earth’s available climates, characterised by mean annual temperatures of around ∼13 °C. Depending on scenarios of population growth and warming, over the coming 50 years, 1 to 3 billion people are projected to be left outside the climate conditions that have served humanity in the past. Absent climate mitigation or migration, a substantial part of humanity will be exposed to mean annual temperatures warmer than nearly anywhere today. (Xu et al., 2020)

Internal climate migrants are rapidly becoming the human face of climate change. By 2050—in just three regions—climate change could force more than 143 million people to move within their countries. (Kanta Kumari Rigaud et al., 2018). Our studies indicate that a substantial number of instances of climate change-induced migration are already happening across the Indian subcontinent. Often, these changes in the climate are the direct result of anthropogenic activities.

We propose that migration is not a system but a behaviour of the system that governs how suitable a location is for long-term settlement. We also propose a set of factors, called the Human Liveability Factors (HLFs for short), that influence this suitability. The impact of these factors is interpreted with a subjective lens by the inhabitants according to the means at their disposal. As the perceived “liveability” of a place falls, the inhabitants tend towards migration.

From a systems perspective, we observed that HLFs influence each other and are externally influenced by factors such as changes in population, particularly in the case of climate migrants’ natural environment stressors. We also draw correlations between NDVI data of the past decade to current climate migration hotspots in the Indian subcontinent, confirming that most of these hotspots lie in regions with a significant loss in vegetation.

We use the HLF framework to demonstrate the case for the Beed district in Maharashtra, India, in the present day and the case of Mumbai, India, against the projected rise in sea level for the year 2040.

We also present three conceptual solutions that cater to the needs of adaptability and resilience to tackle climate migration in India within the context of livelihoods, urban planning, and CSR Initiatives