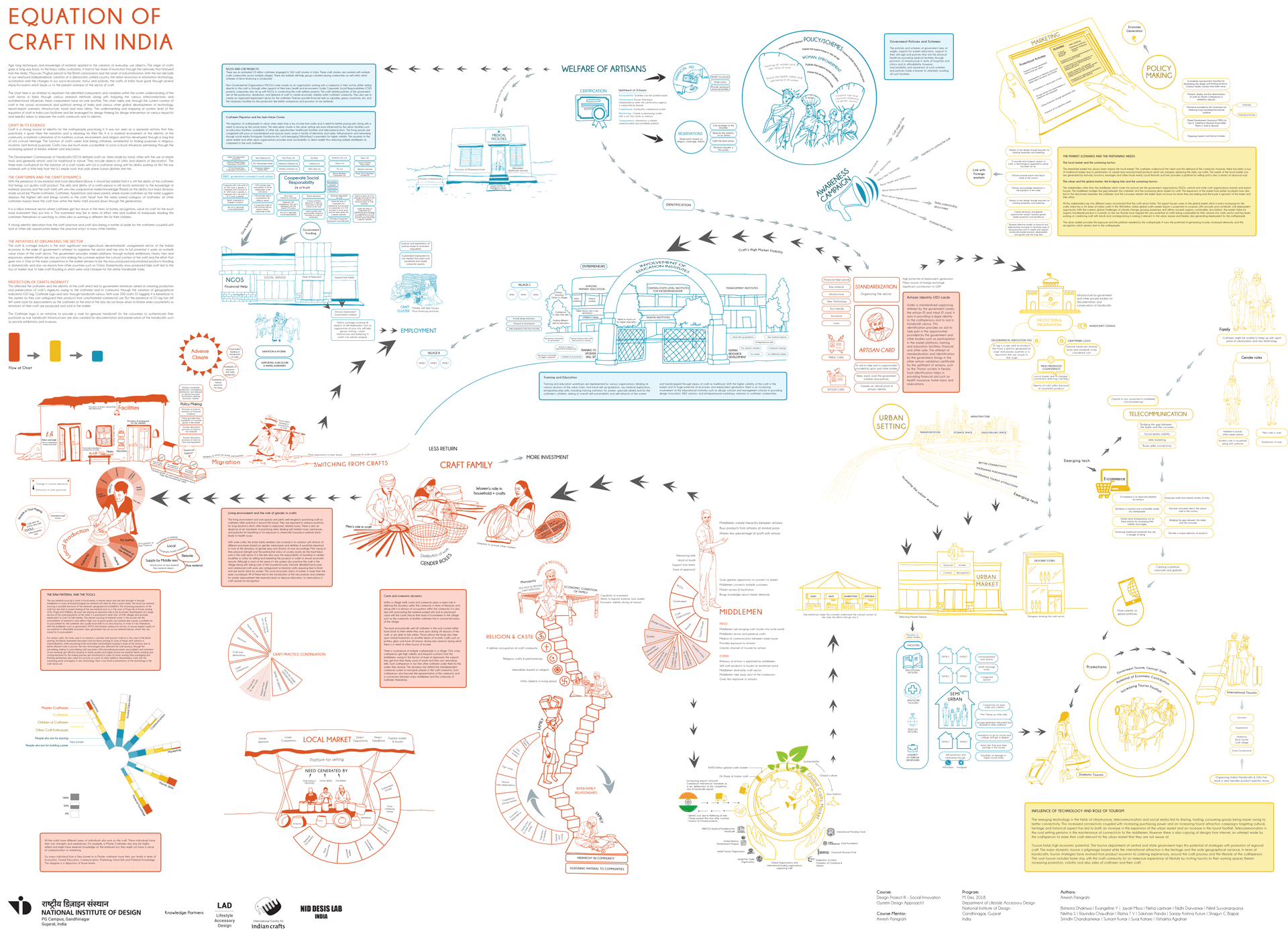 Equation of Craft in India

How to read the map

The reading flow moves from colour-coded sections of red to yellow, followed by the blue section. The complex web of causal loops presented in this system model is simplified for a viewer by adopting a central linear line of flow.

‘Equation of Craft in India’ is a design research project of Craft Future Lab, NID Ahmedabad, India under the collaborative effort of the International Centre for Indian Craft (ICIC), Dept. of Lifestyle Accessory Design (LAD), and Design for Social Innovation and Sustainability Lab (NID DESIS Lab). The project was initiated and led by Prof. Amresh Panigrahi with his fellow 16 Master level Design students of the Department of LAD batch 2018 with the prime objective of attempting to understand the current dynamics in the Indian craft sector.

The origin of crafts goes a long way back, to the Indus Valley civilization. It had its fair share of evolution through the centuries that followed from the Vedic, Mauryan, Mughal periods to the British colonization and the onset of industrialization. The crafts of India have gone through several impactful events with our relatively newfound Independent democratic country and its political and economic development. The current context of craft in the 20th century takes into account the social, economic and geopolitical setting of India with the presence of various global developments in technology, import-export scenario, travel and popular mass ideas.

Here the System mapping is an attempt to represent the identified components and variables and interrelationship within the current system understanding of the craft sector in India.

Craft in its essence

Craft is a vital source of identity for the craftsman as it derived its meaning by its local acceptance in its socio-cultural fabric. It has developed through a long line of rich cultural heritage. The function of crafts varies from being utilitarian, ornamental to finding purposes in religious, ritualistic, and festival purposes. Crafts now are much more susceptible to cross-cultural influences of the increasing spread of media, the internet, and education.

The Development Commissioner of Handicrafts (DCH), India defined crafts as ‘items made by hand, often with the use of simple tools and generally artistic and traditional. They include objects of utility and objects of decoration’. The three main confluence for the creation of a craft comes with (a) an artisan along with his ability working on (b) the raw materials with a little help from the (c) simple tools that aids where human abilities limit him.

The craftsmen and the craft dynamics

The four significant divisions of craftsmen based on their ability are – Master-craftsmen, Craftsmen, Apprentice, and newly joined. Master-craftsmen display the highest skill and bring novelty in the craft. Apart from the newly joined category of artisans, all other craftsmen majorly learn the craft from the master craftsperson or from within the family itself, passed down through the generations.

It is a labour-intensive sector where artisans get less return in terms of money, recognition, value for craft for the much more investment they put into it. The investment may be in terms of effort, time, and the number of workforces.

The real success of a craft is no more confined to the ability of the craftsperson’s skills, raw material and tools. It is the time that demands the market knowledge to make the craft a success. However, the craftsman abilities are currently limited with less market knowledge and mostly restricted to the boundaries of his craft understanding. Lack of knowledge, their struggle with the craft practices and its continuity became much more complicated, which forced them to switch to other jobs or to want a different life for their children.

Initiatives at organising the sector

The craft & cottage industry is the most significant non-agricultural decentralized sector of the Indian economy. In the wake of the government’s attempt to organize the sector and tap into its full potential, it works on multiple value chains of the craft sector. The government provides market platforms through multiple exhibitions, Haats, fairs and emporiums, wherein efforts are put into making the customer realize the cultural context of the craft. One of the major competitors in the market remains to be the mass-produced industrialized products flooding in domestically and also via imports from other neighbouring countries. Domestically, authentic craft loses its market to mass-produced fake craft due to its comfortable, cheaper availability.

The fake market affected the craftsmen and the identity of the craft which led to government initiatives aimed at creating protection and preservation of craft’s ingenuity owing to the craftsmen and its community through the creation of geographical indication (GI) tag, Craftmark logo and also through handicraft census.
With over 200 crafts GI tagged, it is beneficial to the owners as they can safeguard their products from unauthorized commercial use. Presence of the GI tag has still left some room for improvements for craftsman’s awareness and fight for their rights. The Craftmark logo is an initiative to provide a mark for genuine handicraft for the consumers to authenticate their purchase. Private exhibitions and museums purposefully created for documentation and preservation of the handicrafts.

Role of design in craft innovation

With above systematic study, the working groups further discovered various gaps as an opportunity for design-driven strategic intervention. Practice-based Design research facilitates the application of design strategies at various levels to imagine a craft social innovation and its sustainable future.