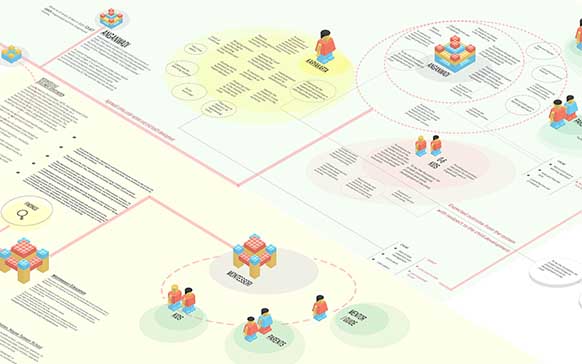 Children are our greatest treasure; they are our future (Nelson Mandela, 2017). Portraying within a metaphorical Lego graphic, This Giga map aims to capture and make connections between the challenges and opportunities in the domains of early childhood education in the Anganwadi sector (pre-primary school) and the possible solution to the primary problem.

We chose a system design approach to study various pre-primary and primary educational models. Initial system mapping using the data from secondary research helped us to find the gap areas. In order to verify the gap and find other opportunity areas, we conducted case studies of primary schools in urban areas. The different research methods we used to conduct our project experiment were the participatory method, interviews, surveys, and observation. It helped us to gain further insights into understanding the context, user, and stakeholders as children, principals, teachers, helpers, and parents.

Data was analyzed using different methods such as stakeholder mapping, system mapping, and cause and effect mapping. After classifying the problems in a difficulty-importance graph, we selected the problem which directly affects our primary stakeholder.

We found out that children in Anganwadi by the government of India lack exposure to proper play-based learning, which can stimulate and develop their cognitive growth; secondly, their teachers and helpers were not able to give them individual attention due to administrative workload.

Later we reformatted the overall problem into suggested solutions by asking, “How might we” followed by an Idea bank. After selecting the solution(idea) using a difficulty-importance graph, we formed our brief, prototyped it, and tested our solution in real life.

Participatory workshops were conducted with children in groups. They were provided with a kit of toys that will enable them to learn a specific skill in a peer learning setup, designed and made by us, and asked to play with it. They instantly started exploring it, and they also created new playful ways of using it, which we didn’t predict. Thus it resulted in a playful, engaging, peer-based interactive learning experience that helped them learn basic concepts of balancing, mathematics, and soft skills.

By using the system design approach, we were able to directly map the problem and solution to the stakeholders, which made it possible to create a solution that would benefit all stakeholders without harming them. Using it, we could easily tackle the correct issue, which can be solved in real life within the time frame.