Systemic design focuses on issues of greater “scale, social complexity and integration” than service or experience design (Systemic Design Association accessed 2018). Given the rapid emergence of the systemic design field, attention has focused on theoretical and methodological development (Jones and Bowes 2017). In this paper, we contribute to this development by formalizing a method, grounded in complexity/resilience theory, for mapping social system identity.

From complexity/resilience theory, we adopt the “landscape” and “attractor” metaphors for conceptualizing stability and change in social systems (Sheffer 2009, Byrne and Callaghan 2014). In this approach, existing or potential social systems can be characterized as “regimes,” with dominant regimes described as business-as-usual and alternatives as niche or innovation regimes (Westley et al. 2011). To further develop this approach, we characterize social systems in terms of identity (Vickers 1980), and then relationally analyze social regime identities in terms of their underlying social factors or logics (Thornton et al. 2012). In these terms, a social attractor can be characterized as a constellation of logics, the “attraction” to which, among social actors, individually and collectively, serves to stabilize the regime (Silverman and Hill 2018).

Based on this model, we describe a method (and suite of techniques) for mapping analogies and distinctions in selected and bounded social systems and scenarios, as constructed by design strategists and/or by group-process participants. While this method is itself quite straightforward, its application encourages systemicity both in the models that can be developed and in the dialogs and deliberations that can be facilitated. In order to situate this method within a systemic design toolkit, we compare it with the methods described and illustrated by, for example, Sevaldson (2012/2017) and Jones and Bowes (2017), as well as with the wider literature on analogy making and comparative analysis (e.g., Hesse 1966, Hofstadter and Sander 2013).

In 2017, seeking to standardize and accelerate adoption of one mapping technique, we developed a “regime shift canvas” (Silverman et al. accessed 2018). This canvas is based on a bricolage of the landscape model with the design “bridge model” (Dubberly et al. 2008). In this bricolage, the “model of what is” in the bridge model represents a business-as-usual social regime and, by analogy and/or distinction, the “model of what might be” represents an alternative social regime or scenario. This canvas can be used in a variety of ways: as a prompt to individual creativity, as a basis for group facilitation, and as a heuristic device that informs the use of other analytical, group process, and/or foresight techniques.

This standardization also highlights the limitations of a singular technique and artifact (i.e., “canvas”). We discuss these limitations, and then describe additional techniques for mapping social system identity. Each of these techniques is illustrated herein, with examples drawn from the referenced literature and from student mappings developed in masters degree-level design programs at Pacific Northwest College of Art. In effect, these techniques represent variations on the bridge model, and we diagram each of them as such.

Byrne, D., and G. Callaghan. 2014. Complexity theory and the social sciences: the state of the art. Routledge, London, UK. 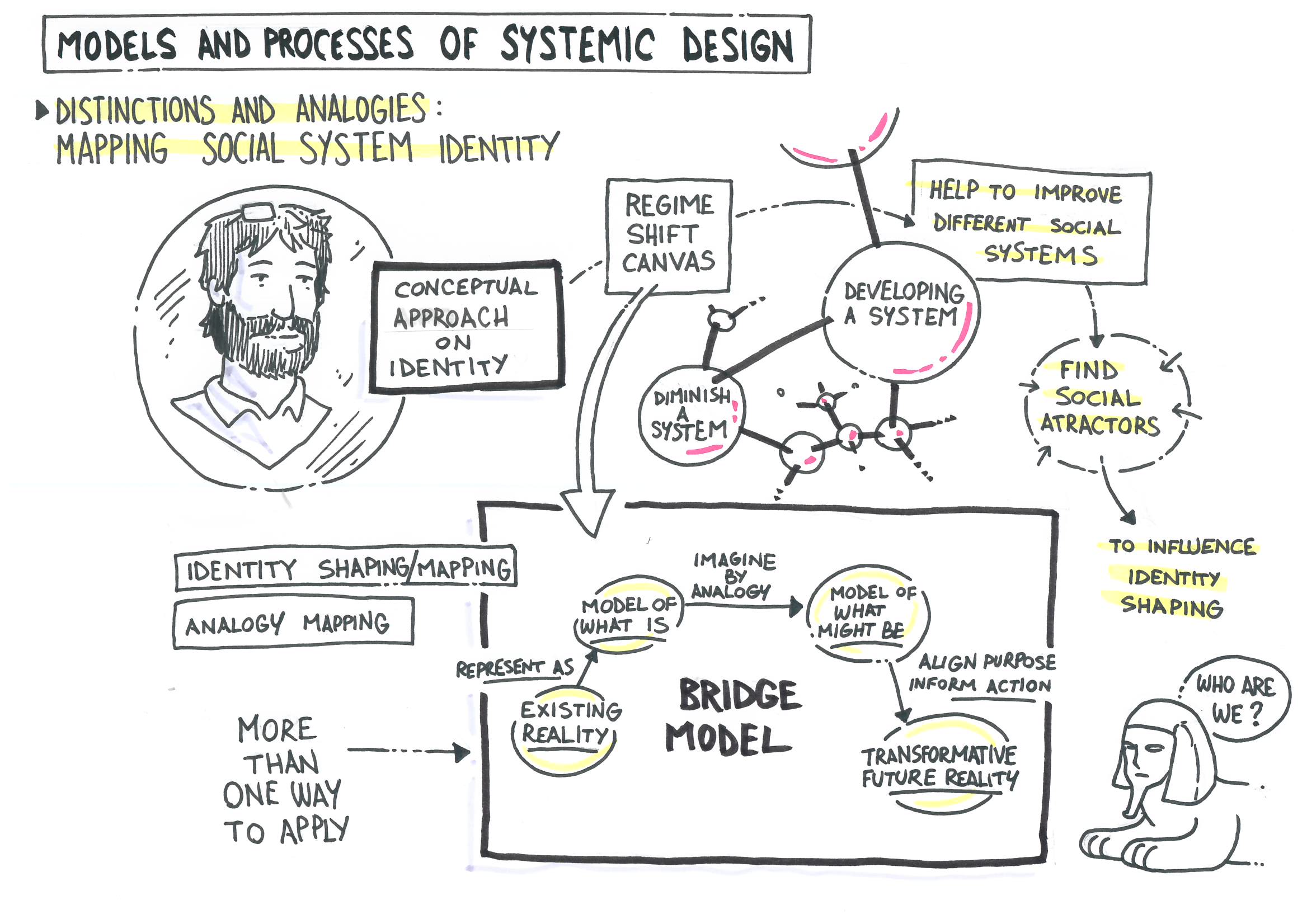