Design, as a practice that operates within artificial systems, draws upon a multiplicity of knowledge domains situated within entangled technical, economic and social systems. As a result of operating within the high level of complexity of entangled systems, the object of design expands as it shifts from nodes in the system to lines and to meshes. According to Latour (2008), design has moved from being a superficial layer added to objects to be interwoven in the processes that constitute ‘things’, which are assemblages of human and non-human agents in a system. Design has grown in comprehension, so that it became so it became integral to the inner meaning of things and extended to include larger assemblages so that “cities, nations, cultures, bodies, genes and the nature itself” can all be designed. New capabilities that are enabled by radical technological changes allow not only deciphering the complexity of ‘living things’ across scales -from genes to the nature- but also designing them. This paper proposes that new models and frameworks, which draw on evolutionary models, can facilitate navigating emergent design spaces.

Biotechnology, deemed as the dominant technology of our century (Dyson, 2007) is the convergence of life, physical and engineering sciences. Biotechnology ecosystem is an example of an open innovation system that is comprised of heterogeneous networks that weave small, science-based biotechnology companies, investors, and nonprofit research organizations into a community which operates based on the principles of aggregation, self-organization, and soft-assembly (Powell and Owen-Smith, 2004). The convergence of separate knowledge domains not only increases the number of application areas but also changes how research is being conducted. Because of the blurring disciplinary and institutional boundaries, the distinction between pure and applied research is becoming obsolete while knowledge domains are reconfigured towards supporting added value applications through use-inspired basic research and vision-inspired basic research (Roco et al. 2013).
Design attributes affordances to a product for known and unknown use in order to create value. However, Akrich argues that the actual uses of technologies are much more complex than what is inscribed in technical objects as ‘a framework of action together with the actors and the space in which they are supposed to act’ (1992). According to Heskett, design is an interface between the context of production and the context of use in which the value is created (2017). In the context of production design establishes the connections between technological opportunity, social institutions and economic value. In the context of use, the design product is put into context by its users. Hence, utility and meaning are constructed, whose relationships are mediated by the product. The structures that constitute the context of production and the context of use are not fixed but highly adaptive and contingent as these contexts co-evolve. In the development of emerging technologies, these structures start adapting once the technologies are put in the context of use. For example, the inclusion of the wider group of users often propels the formation of new networks and in turn new application areas.

Since the potential application areas of emerging technologies are not always obvious, evolutionary models could give insights into how value could be created through design. Fitness landscape model enables visualizing the attributes that contribute to fitness and the distribution of fitness across the topography. Thus, the model can also inform how the agents will move across the landscape to increase fitness, in other words, to adapt. Evolution is a process of search over fitness landscapes in which the topography determines the likelihood of success (Kauffman, 1992) which is determined by the agent’s ability to adapt to the landscape and it is dependent on both the attributes of the agent and its interdependencies to other agents in the ecosystem. Fitness landscape model could give insights into understanding the development and evolution of emerging biotechnologies.

This paper proposes a model for value creation which builds on complex adaptive systems and fitness landscapes theories to navigate the unfamiliar design space. Drawing on Heskett, proposed three—dimensional fitness landscape (Fig. 2) is defined by “economic value”, “technological opportunity” and “social institutions”. In unfamiliar design spaces, such as those defined by changes in biotechnology, fitness cannot be achieved purely by hill-climbing. As Norman and Verganti (2013) state hiII-climbing could be an effective strategy in finding local peaks, but there is the risk of becoming trapped in a valley or on a local peak. Radical changes in the landscape create higher peaks, however, it is difficult to locate the peaks in unfamiliar design spaces. Thus, to reach the highest peak a combination of hill-climbing and other ‘adaptive walks’ has to be employed.
The are several approaches to designing the adaptation. First Levinthan and Warglien (I999) propose that by “designing the surface on which adaptation processes take place”, the quality of the adaptive process could be altered rather than directing the behaviors and actions of each individual. Because the major determinant of a fitness landscape is the density of interdependencies of interacting agents within a system, the primary landscape design activities would involve the manipulation of these interdependencies. Thus, the ecosystem would be influenced to change without having to manipulate individual agents.
A second approach would involve increasing the adaptation capacity of individual agents through design. Design could be employed as a generative process to increase the diversity of efforts in innovative search, which would help to generate more recombination possibilities of technologies for application and reconfiguring internal structures to adapt to environmental changes. In the case of biotechnology, successful adaptation will require a combination of both approaches since most of the innovation capacity relies on both distributed networks of production and the unique set of capabilities of the individual agent while the ecosystem in which innovative search takes place is influenced by social institutions and economic value.

Kauffman, Stuart A. “The origins of order: Self-organization and selection in evolution.” Spin glasses and biology. (1992): 61-100.

Latour, Bruno. “A cautious Prometheus? A few steps toward a philosophy of design (with special attention to Peter Sloterdijk).” Proceedings of the 2008 annual international conference of the design history society. 2008.

Owen-Smith, Jason, and Walter W. Powell. “Knowledge networks as channels and conduits: The effects of spillovers in the Boston biotechnology community.” Organization science15.1 (2004): 5-21.

Design as adaptation from RSD7 Symposium 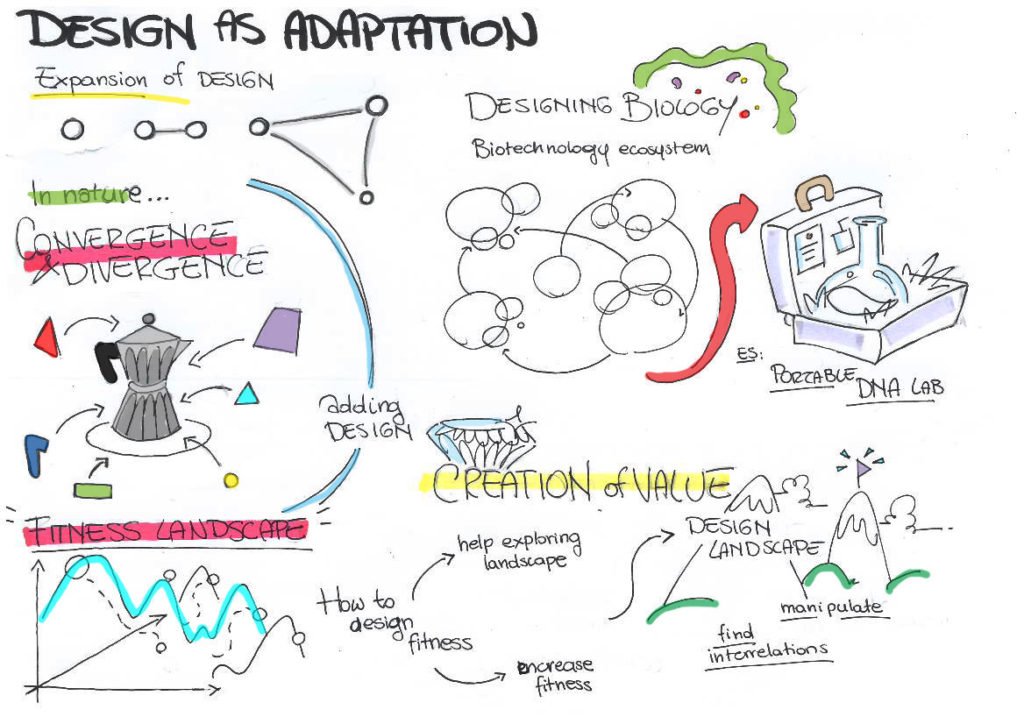