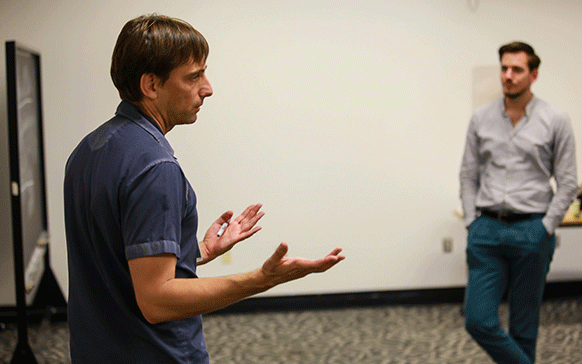 ADCID follows a capacity-focussed approach in all it’s community projects, with strong ethical framing around building long-term projects which build local facilitation capacity within both community members and partner organisations. This work involves engaging complexity and uncertainty in soft systems. This requires reflective practices to make sense of our relationship to the system and inform adaptive decision making in: strategy development, implementation, monitoring, and developmental evaluation.

In the context of the RSD5 workshop, participants will probe a soft-system of their choosing, and reflect on the relationships they encounter. They reflect on personal/emotional responses provoked by doing so. What kinds of soft system relationships and dynamics are observed? In the situations being explored; what are the dynamics from different perceptual positions? How are possible structural roles, and norms in the soft system, interpreted by different actors? Does this challenge the way knowledge is constructed, negotiated, and decision making influenced?

The central method being facilitated in the workshop has been named by Stephen Sillett as “Conceptual Action Sociometry”. He first publicly facilitated the approach in 2009 at the Pedagogy and Theatre of the Oppressed Conference, University of Nebraska, Omaha. Since then, this method has been facilitated with local communities, teachers, and staff in organisations. Participants orient themselves in the room by reflecting upon real situations (or constructed scenarios) that relate to the scope and theme being explored. It is a powerful process, that has many deeper levels.

The structured core of the Conceptual Action Sociometry method relates three interlocking dimensions, whose coordinates are assigned to 3 locations in a room – participants position themselves in relation to these locations and then orientate themselves to provoke tension. The process is facilitated in an emergent way, working with feedback from participants and integrating arts-based processes. The meaning-making unfolds in such a way, that participants’ Somatic Intelligence guides their engagement with space. As the session progresses the participants meaning-making becomes coupled with space, which becomes increasingly psycho-active for the participants.