Some of the most significant challenges of sustainability can be traced back to the complexity of social and ecological phenomena and the difficulty to connect these with design decisions made at the level of products and business models. Such complex systems are especially difficult to assess and influence as they do not lend themselves to simple causality relations and prediction (Boulton et al, 2015; Jones et al. 2014).

A few schools of thought in design are explicitly embracing complexity, such as systemic design (Jones et al. 2014) and transition design (Irwin 2018). Building upon insights from complexity science, they encompass a wide range of design methodologies, such as giga- mapping (Sevaldson 2011), system maps (Irwin 2018), or co-creation (e.g. Sanders and Stappers 2008).

The vast majority of methods described in systemic and transition design literature are qualitative in nature. This is in stark contrast with the methods used in complexity science – or complex systems science. This interdisciplinary field of science has been built predominantly upon the use of quantitative, computational models, a number of which have been applied to social phenomena, e.g.

Network theory enables the modelling of a set of elements interacting with each other, such as people in a social group, employees in a company, or companies in a supply chain (Newman 2010). This type of approach has delivered numerous insights, e.g. on the structure of social networks (Scott, 2017), the organisational needs of engineering projects (Sosa et al, 2004), and the robustness of the internet and the web (Réka et al. 2000), as well as to sustainability questions (e.g. Bodin and Tengö 2012)

System dynamics can be used to model a system of interconnected stocks and flows and their evolution over time. This method has been used to assess scenarios of global ecological challenges (Meadows et al. 1972), as well as to inform business model design (Cosenz 2017), conservation initiatives (Johnson et al. 2012) and pathways towards sustainable development (Hjorth and Bagheri 2006).

Agent-based models provide a way to simulate the dynamics of social systems by placing explicit emphasis on how they emerge from the behaviours of individuals (the ‘agents’) (Van Dam et al. 2012). Their applications include the dynamics of segregation (Schelling 1978, Wilensky 1997), policy analysis (Lempert 2002, Nikolic and Dijkema 2010), and industrial ecology (Axtell et al. 2001).

Systems of differential equations can be used to represent certain phenomena at aggregated levels, e.g. to give a mathematical representation of the response of societies to societal problems (Scheffer et al. 2003).

If computational models have such a potential for design, why haven’t such methods been promoted in the literature on systemic and transition design? We explore the potential causes of this reluctance through three key questions, and deduct lessons for the development of computational methods in design for complex systems, and therefore design for sustainability.

1. Can humans be modelled?

It is fair to ask whether mathematics can usefully describe social phenomena. Supporting this concern, the field of economics has in the past heavily underplayed the complexity of human behaviours, using drastically simplified assumptions to enable mathematical description (Arthur 1999).

The response to this concern is 2-fold. First, models of human behaviours have greatly improved over the past decades, e.g. through behavioural economics. These improved hypotheses however still need to be made explicit in research, as they often reflect certain values and worldviews.

Second, today’s online tools have given rise to unprecedented data about human behaviours, through the field of computational social science (Conte et al. 2012). The applications to design are worth considering (Lettieri 2016).

Recent research (Moat et al. 2014) demonstrates the growing ability of modern techniques to predict social behaviors and, if this weren’t enough warning, recent news headlines highlight the implied risk that this be used to manipulate people. The ethical considerations of modelling humans should thus always be considered carefully.

2. Are design and modelling practices compatible?

Developing a computational model requires strong critical thinking and rigour. It can thus be more conducive to removing ideas than to creating new ones. Could it stifle the generative, creative thinking that is central to design? Two approaches to avoiding this shortcoming are to carefully think of the phase in which to integrate the use of a model and to leverage intuition and ideas from the designers and stakeholders as inputs into the model.

Data analysis and modelling can be time consuming and require specialised skills, so they can be cost intensive. Budget or planning may therefore motivate their exclusion. What may address this issue is the development of interfaces and platforms enabling the adaptation of existing models to new situations. As an illustration of such solutions, the platform Kumu offers a user-friendly interface for network analysis.

Finally, designers often question whether such models would support the engagement of stakeholders, as they can come across as dry and complicated. Participatory modelling experiments demonstrate that stakeholder engagement can be an integral part of the modelling process (Schmitt Olabisi et al. 2010), as long as the process is developed with this intent from the start.

3. Can you model with limited data?

Finally, some powerful computational models rely on very large datasets from online use, such as Facebook or Twitter data (Conte et al. 2012). A design problem however does not start with a dataset, but with a problem to solve. As a result, not every systemic problem will possess such a dataset. Design by definition takes place at an early stage of intervention, before the project itself has delivered data. Are computational models still relevant in these contexts? Here are a few responses to this concern.

Second, much can already be learnt form models based on limited data, complemented with plausible assumptions. Uncertain data can also be treated as the source of multiple scenarios (Kwakkel 2013).

Finally, there is an opportunity to approach models in a lean, iterative manner: a first model is built based on theory and hypotheses, which can already help to explore and refine the assumptions of the stakeholders and designers; such a model will in turn inform which data to gather throughout the project, so that more and more refined versions can be developed iteratively.

As the discussion above suggests, there is an opportunity in expanding current design methods with computational models, provided the following considerations:

The next steps in demonstrating this potential is to build case studies of design projects leveraging computational models. Adequate cases would concern issues affected by social complexity, which means that the interactions between individuals play a key a role in outcomes. Ideally, data sets should be available, either from the start of the project or through its development. Finally, such projects will require stakeholders that are curious and willing to experiment with new approaches.

This paper showed that despite the fact that much of complexity science is based on quantitative, computational models, the literature on design concerned with complex systems refers nearly exclusively to qualitative approaches. It explored some of the key questions that may be motivating this reluctance to leverage computational models of social systems, deducted a set of guiding principles for their introduction in design for sustainability, and proposed next steps to this endeavour.

Given the urgency to address some of today’s societal questions, no stone should be left unturned. Computational models have repeatedly proved their power to shed light on complex social dynamics of importance to sustainability. It is time to explore their application to the field of a design to enable the transition towards sustainable societies.

Ellen MacArthur Foundation, 2013. Towards the Circular Economy, Economic and business rationale for an accelerate transition.

Lakoff, G. and Johnson, M., 2008. Metaphors we live by. University of Chicago press.

Nikolic, I. and Dijkema, G.P., 2010. On the development of agent-based models for infrastructure evolution. International journal of critical infrastructures, 6(2), pp.148-167.

Sevaldson, B., 2011. GIGA-Mapping: Visualisation for complexity and systems thinking in design. Nordes 4 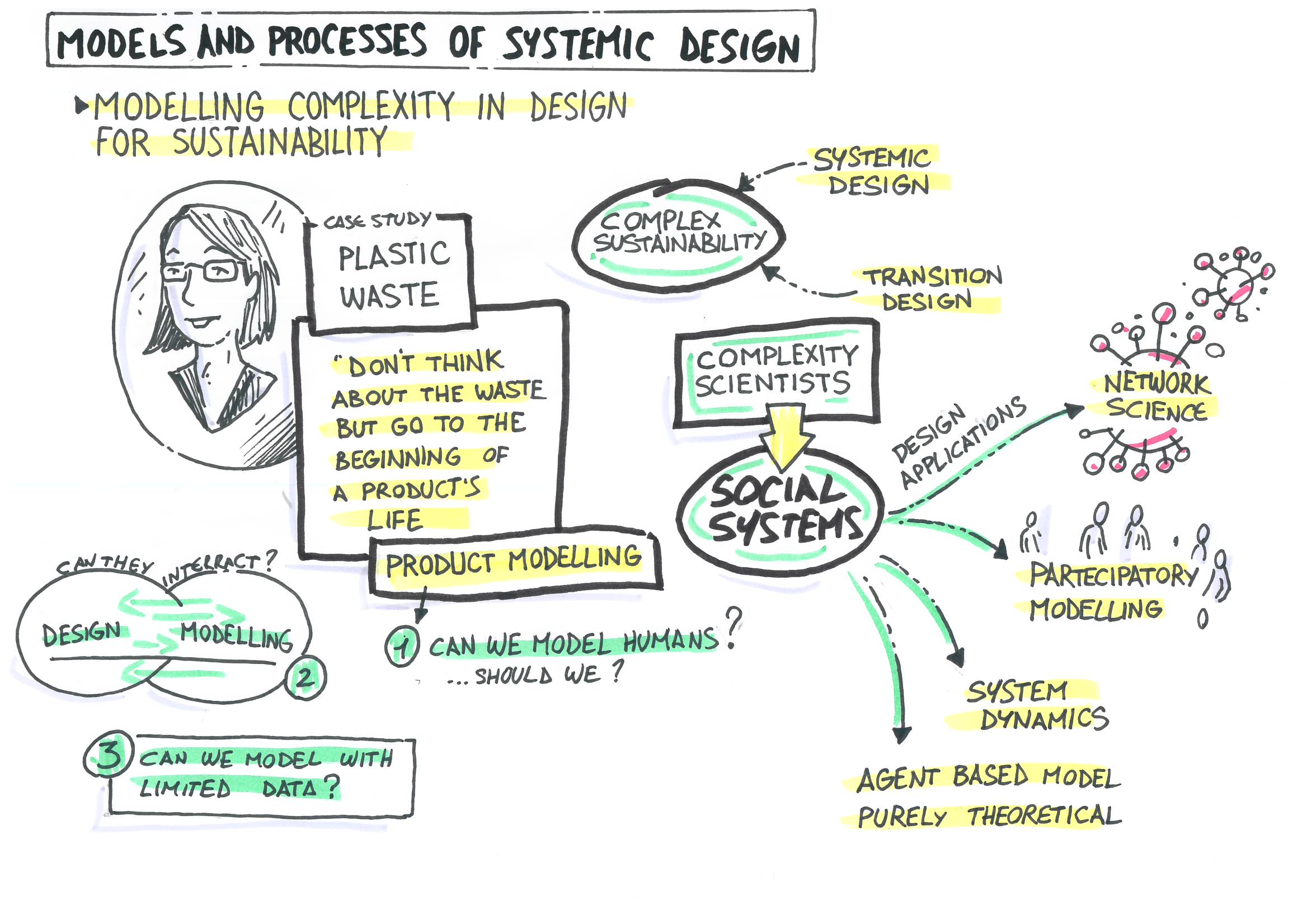