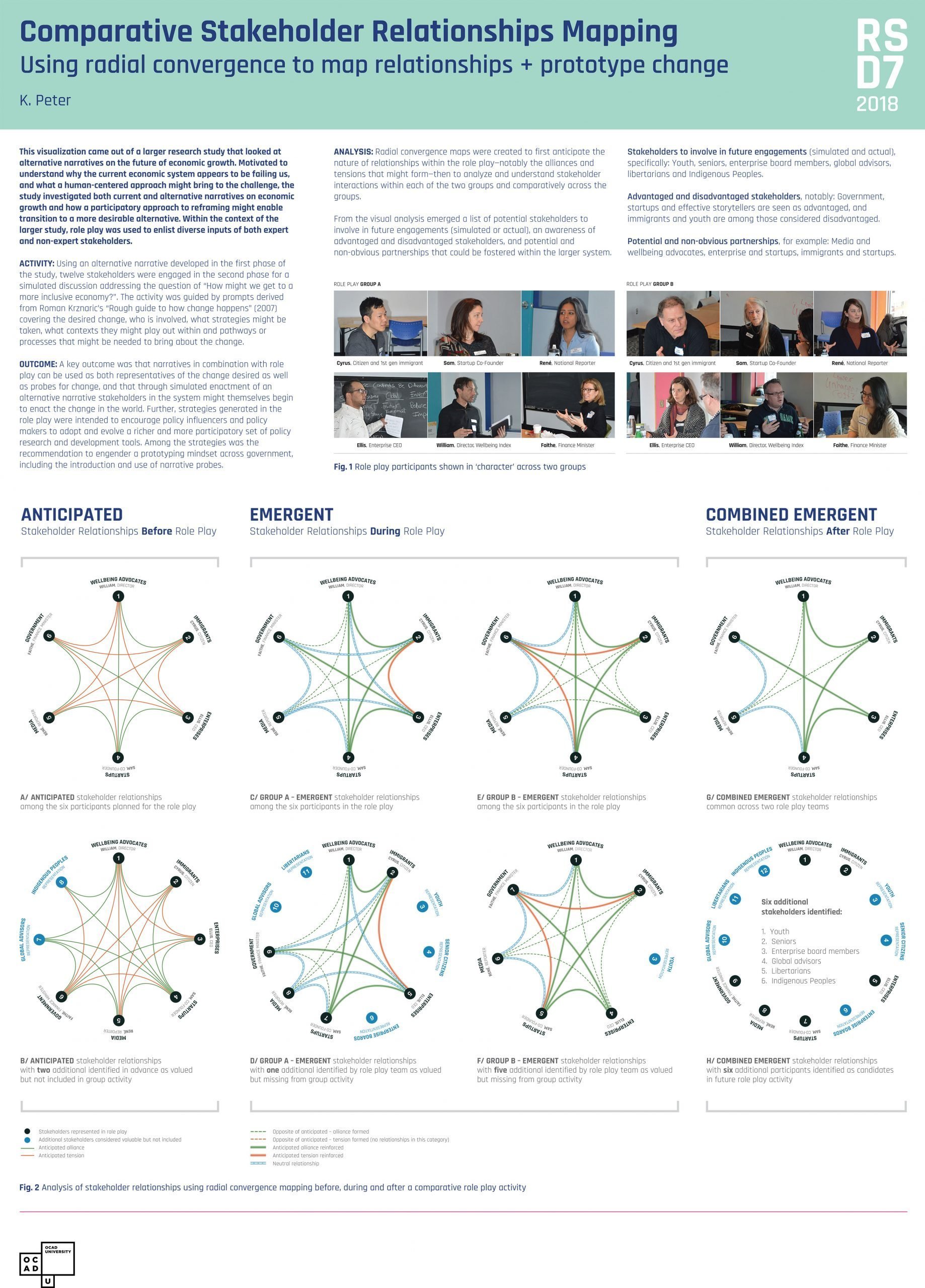 This visualization came out of a larger research study that looked at alternative narratives on the future of economic growth. Motivated to understand why the current economic system appears to be failing us, and what a human-centered approach might bring to the challenge, the study investigated both current and alternative narratives on economic growth and how a participatory approach to reframing might enable transition to a more desirable alternative. Within the context of the larger study, role play was used to enlist diverse inputs of both expert and non-expert stakeholders. ACTIVITY: Using an alternative narrative developed in the first phase of the study, twelve stakeholders were engaged in the second phase for a simulated discussion addressing the question of “How might we get to a more inclusive economy?”. The activity was guided by prompts derived from Roman Krznaric’s “Rough guide to how change happens” (2007) covering the desired change, who is involved, what strategies might be taken, what contexts they might play out within and pathways or processes that might be needed to bring about the change. OUTCOME: A key outcome was that narratives in combination with role play can be used as both representatives of the change desired as well as probes for change, and that through simulated enactment of an alternative narrative stakeholders in the system might themselves begin to enact the change in the world. Further, strategies generated in the role play were intended to encourage policy influencers and policy makers to adopt and evolve a richer and more participatory set of policy research and development tools. Among the strategies was the recommendation to engender a prototyping mindset across government, including the introduction and use of narrative probes. ANALYSIS: Radial convergence maps were created to first anticipate the nature of relationships within the role play—notably the alliances and tensions that might form—then to analyze and understand stakeholder interactions within each of the two groups and comparatively across the groups. From the visual analysis emerged a list of potential stakeholders to involve in future engagements (simulated or actual), an awareness of advantaged and disadvantaged stakeholders, and potential and non-obvious partnerships that could be fostered within the larger system. STAKEHOLDERS TO INVOLVE IN FUTURE ENGAGEMENTS (SIMULATED AND ACTUAL), SPECIFICALLY: Youth, seniors, enterprise board members, global advisors, libertarians and Indigenous Peoples. ADVANTAGED AND DISADVANTAGED STAKEHOLDERS, NOTABLY: Government, startups and effective storytellers are seen as advantaged, and immigrants and youth are among those considered disadvantaged. POTENTIAL AND NON-OBVIOUS PARTNERSHIPS, FOR EXAMPLE: Media and wellbeing advocates, enterprise and startups, immigrants and startups.