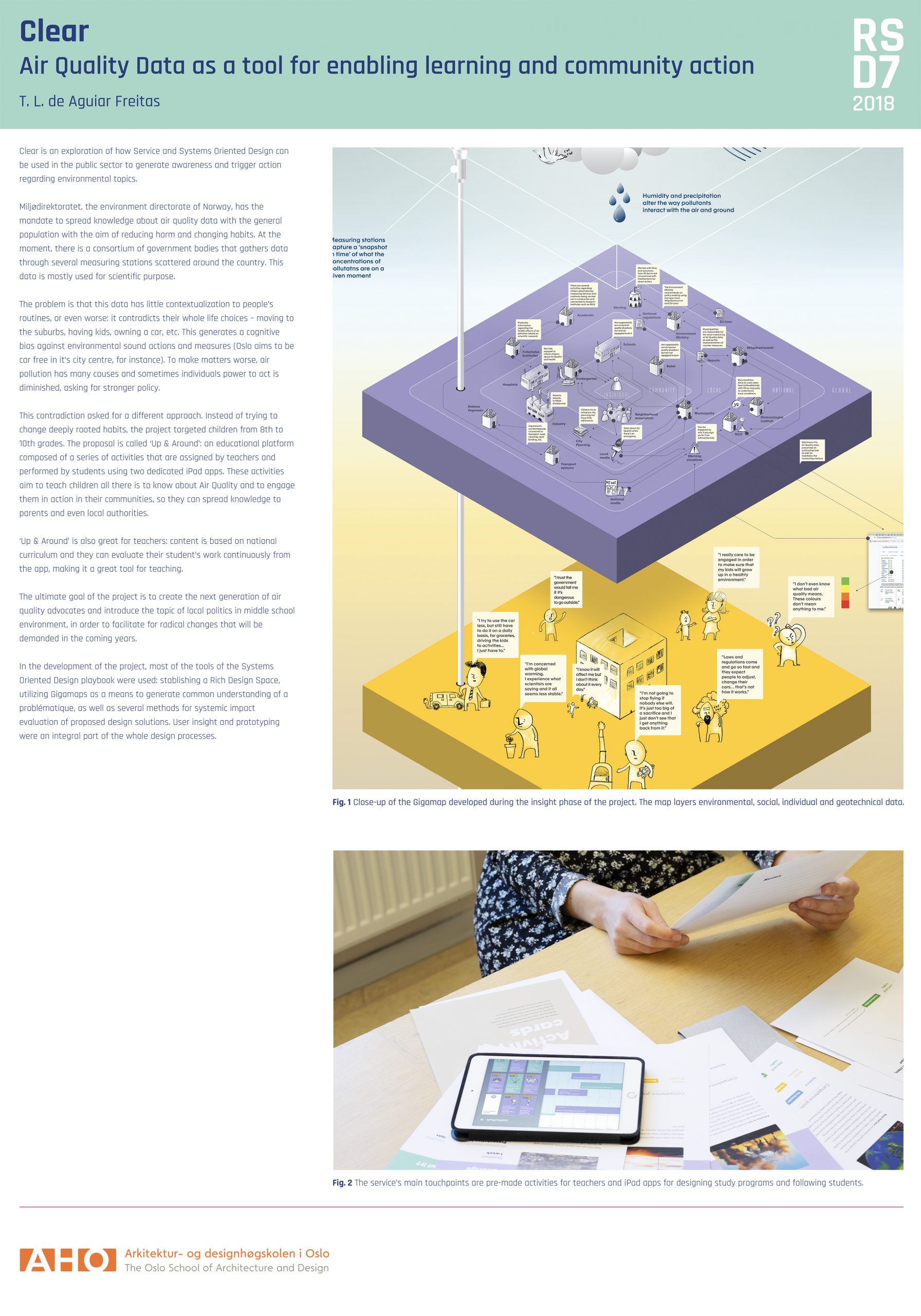 Clear: Air quality data as a tool for enabling learning and community action

Clear is an exploration of how Service and Systems Oriented Design can be used in the public sector to generate awareness and trigger action regarding environmental topics. Miljødirektoratet, the environment directorate of Norway, has the mandate to spread knowledge about air quality data with the general population with the aim of reducing harm and changing habits. At the moment, there is a consortium of government bodies that gathers data through several measuring stations scattered around the country. This data is mostly used for scientific purpose. The problem is that this data has little contextualization to people’s routines, or even worse: it contradicts their whole life choices – moving to the suburbs, having kids, owning a car, etc. This generates a cognitive bias against environmental sound actions and measures (Oslo aims to be car free in it’s city centre, for instance). To make matters worse, air pollution has many causes and sometimes individuals power to act is diminished, asking for stronger policy. This contradiction asked for a different approach. Instead of trying to change deeply rooted habits, the project targeted children from 8th to 10th grades. The proposal is called ‘Up & Around’: an educational platform composed of a series of activities that are assigned by teachers and performed by students using two dedicated iPad apps. These activities aim to teach children all there is to know about Air Quality and to engage them in action in their communities, so they can spread knowledge to parents and even local authorities. ‘Up & Around’ is also great for teachers: content is based on national curriculum and they can evaluate their student’s work continuously from the app, making it a great tool for teaching. The ultimate goal of the project is to create the next generation of air quality advocates and introduce the topic of local politics in middle school environment, in order to facilitate for radical changes that will be demanded in the coming years. In the development of the project, most of the tools of the Systems Oriented Design playbook were used: stablishing a Rich Design Space, utilizing Gigamaps as a means to generate common understanding of a problématique, as well as several methods for systemic impact evaluation of proposed design solutions. User insight and prototyping were an integral part of the whole design processes.