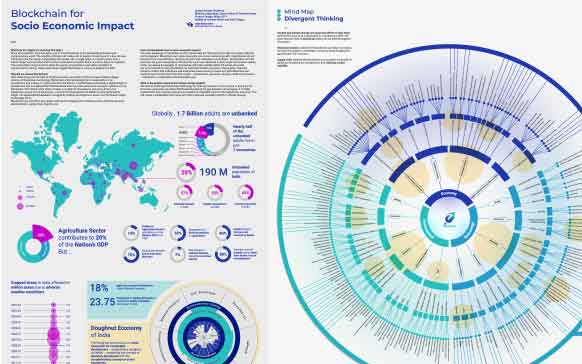 Blockchain is often viewed as a tech-savvy solution for profit-making businesses. But it has an immense potential to solve global problems with its core of decentralization. We wanted to explore a systemic approach to using blockchain as a tool for social good.

We created a hypothetical company “Environ” to address blockchain for socioeconomic impact. Financial inclusion, doughnut economy, and technology adaptation were the major issue that we targeted to solve. Participatory workshops, design sprints, expert sessions, and user interviews were conducted to structure the brief. A speculative service is designed as a first pilot project on Environ blockchain platform targeting Indian farmers for benefitting the agricultural sector of India following a bottom-up approach (human-centric design).

The system comprises two services. The first service is aimed at providing affordable and accessible financial services to the farmers in the form of microfinance and micro-credit systems. The second service is aimed at creating a transparent agricultural supply chain to reduce middlemen and supply-demand volatility. Thus, we are aiming to create an inclusive and sustainable economy by solving poverty and climate change in the agricultural sector.

The first part of the map presents the global financial inclusion statistics referred from World Bank reports followed by statistical analysis showing the relation between economy and climate change in agriculture.

The yellow circles denote our focus areas which have been continued to our network map which has the activity line of a farmer.

At the top and bottom of the activity line, there are stakeholders of finance and resources respectively.

The highlighted area in the network map is visualized with isometric illustrations.

To view the map detail, click the black arrow on the right. You can zoom in from the view on the new tab and explore the whole map. You can also download the full-size map from the new tab.