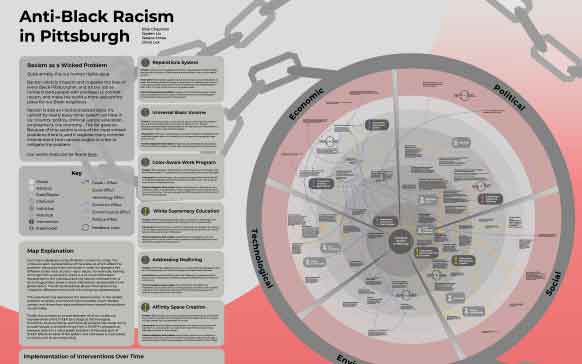 Gigamapping is used in systems thinking to visually represent complex and wicked problems. Our team applied the gigamapping method to better understand and create a system of interventions for anti-Black racism in Pittsburgh. Racism directly impacts and impedes the lives of every Black Pittsburgher, and it’s our job as humans and designers to combat this, to make the world a more welcoming place for our Black neighbours. Upheld by nearly every system in our country, anti-Black racism is one of the most wicked problems there is, and requires many complex interventions from various angles to mitigate the problem.

Our team used mess mapping, the three horizons timeline, STEEP (Social, Technological, Environmental, Economic, Political), and leverage points in our approach to developing our gigamap. After going through these methods, we concluded that in addition to the traditional social, environmental, economic, and political lenses, anti-black racism requires to be viewed from a historical lens as well. We found that the historical lens augmented our understanding of current issues and potential interventions.

Our gigamap is contained within the large circle on the right-hand side of the poster. This circle is divided into five STEEP lenses and six scalar circles, and also contains feedback loops, system shareholders, intervention points, and connections. These are further clarified by the key, located on the leftmost column in the middle box. For a more in depth explanation of the intervention points, there are six boxes that discuss the problem being addressed, the intervention, and potential negative externalities, labeled with the intervention symbol. The six intervention points are also placed along an implementation timeline in the bottom left.

To view the map detail, click the black arrow on the right. You can zoom in from the view on the new tab and explore the whole map. You can also download the full-size map from the new tab.