Our contribution is based on a case study of the systemic, human-centered and iterative approach employed by OvestLab, Modena, and reflects on relevant implications for the implementation of a circular economy in Italy.
OvestLab is an ongoing experimentation that contributes to current debates within academia, local administrations and civil society on urban vacants, namely buildings and spaces that are no longer serving their purpose as places of production, market exchange and social interaction. It also shows how a circular approach to commerce, supported by interdisciplinary expertise, can ensure sustained revenues, reduce material consumption and address territorial changes due to complex variable forces, such as technological innovations and market volatility. Finally, OvestLab offers an example of how knowledge exchange with similar initiatives in other countries, enabled by an online platform, fosters interterritorial learning that is beneficial to all parties involved.

From a methodological point of view, our analysis is informed by two main sources. Firstly, one of the authors has been involved with OvestLab from its inception, both as part of the executive board in one of the associations responsible for the project and as a member of a local artist collective. Secondly, we integrated her description and reflection with documents written both as intermediary outputs for the project or by other actors not directly involved with OvestLab.

Located in the West part of Modena, OvestLab is part of the city’s Villaggio Artigiano (Artisans Village), which for many years represented a virtuous example of collaboration between the local administration and small private enterprises. Since the 2008 financial crisis, however, the Village experienced significant socio-economic decline, exacerbated by an increase in vacant buildings that served both residential and productive purposes.
OvestLab is based in a former factory that, after closing ten years ago, has recently been requalified to become a hub for local open spaces and shared initiatives that address a number of multifaceted territorial issues, among which the lack of public spaces. The project is led by two associations, namely Amigdala and the Archivio Architetti Cesare Leonardi.
Conceptually, OvestLab wants to promote initiatives that are founded on the sense of community shared by local stakeholders (which is undoubtedly fragmented but still present); that reflect upon alternative imaginaries to guide actions addressing both ecological and economic issues; and that propose new symbolic and cultural meanings to spaces that can support the resilience of the territory and its community.

To analyze the collaborative actions currently ongoing as part of the Village’s regeneration process, we draw a number of theoretical guidelines from systemic design literature:

Our aim is to contextualize these concepts through the analysis of the following actions:

Dimensions of Life Into a Science of Sustainability. New York, NY: Doubleday. 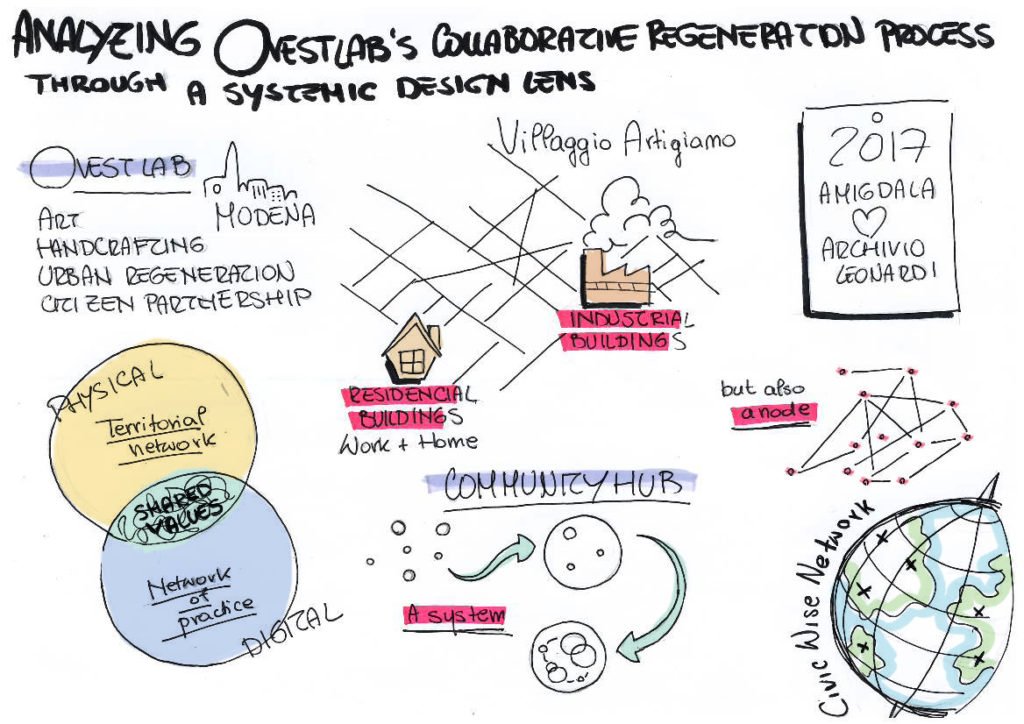