Increasing inequality, rising social unrest and climate change suggest new approaches to economic growth are needed. Motivated to understand why the current economic system appears to be failing us, and what a human-centered approach might bring to the challenge, this research study investigated both current and alternative narratives on economic growth and how a participatory approach to reframing might enable change to a more desirable alternative.

Much has been written both in favour of, and in dissent to, the current orthodoxy around economic growth. Alternative ways of seeing and approaching economy have been proposed since its inception. Not in abundance, however, are comparative views of alternatives. In addition to providing a comparative view of three different narratives on economic growth, this study brings the perspective and tools of human-centered design to a complex systems challenge and proposes taking the value of design thinking and a prototyping mindset beyond service delivery to the level of policy research, design and development.

Two primary phases and approaches were used in the research process. In the first phase on ‘understanding the narratives’, Causal Layered Analysis (Inayatullah, 1998) was used to understand the causes, processes and outcomes of economic growth, as well as alternatives to it, based on interviews with six subject matter experts working in the areas of, or related to, economics and economic policy. The three narratives that emerged included the current growth-first narrative, which came to be called “domination” based on its dominance-based logic and the self-interest that exemplifies market fundamentalism; an emergent narrative, named “participation” for its orientation toward increased social and economic participation within international and national agendas for inclusive growth; and a speculative narrative, which took the name of “freedom” because it embodies notions of independence, self-determination, autonomy and democracy.

In the second phase on ‘exploring change’, the freedom narrative was used as an input to reframe economy and engage two groups of stakeholders in a simulated participatory role-play experience addressing the question of How might we get to a more inclusive economy? The role-play was structured around Roman Krznaric’s “Rough guide to how change happens” (2007) and used non-experts in a generative activity for exploring change and probing potential relationships for future stakeholder engagements. Outputs from this second phase informed five candidate strategies for change intended as proposals to encourage policy influencers and policy makers to adopt and evolve a richer set of policy research and development tools.

As powerful as Causal Layered Analysis and role-play were on their own as primary approaches in each phase of the research study, a key outcome of the project was that Causal Layered Analysis and role-play used in combination may be an even more powerful approach for engaging diverse stakeholders as participants in their own collective futures. More specifically, having stakeholders use the reconstructed narratives from Causal Layered Analysis to explore change in the context of role-play, they can iterate on the system itself. In this way, narratives can be used as both representatives of the change desired as well as probes for change, and through simulated enactment of the alternative, stakeholders in the system might themselves begin to enact the change in the world.

This paper is structured in three parts. First, a brief overview of three narratives on economic growth is provided and conveys key insights about those narratives based on Causal Layered Analysis. Second, an approach to engaging diverse stakeholders using role-play for exploring change at the system level is described, along with how radial convergence mapping can be used as a visual analysis tool to understand stakeholder relationships and inform iterations on systemic challenges. And third, ideas generated in the context of research on economic growth, and lessons learned from the use of role-play, are put forward as approaches for engaging the makers, influencers and receivers of public policy.

Readers of this study might find useful its coverage of alternative narratives on economic growth and how they compare; how role-play can be used for its transformational potential among a group of diverse stakeholders to help empower people outside the system of typical decision makers, to discover new relationships and to be used as a rehearsal method for future stakeholder communications and collaborations within a system; and how role-play might be used as a generative approach for candidate strategies for change, including potential new tools for policy research and engagement and using narratives as probes for testing readiness for, and resistance to, change.

This study will be useful to both academics and practitioners interested in how a human-centered and systemic design approach might be brought to the challenge of policy research, design and development. 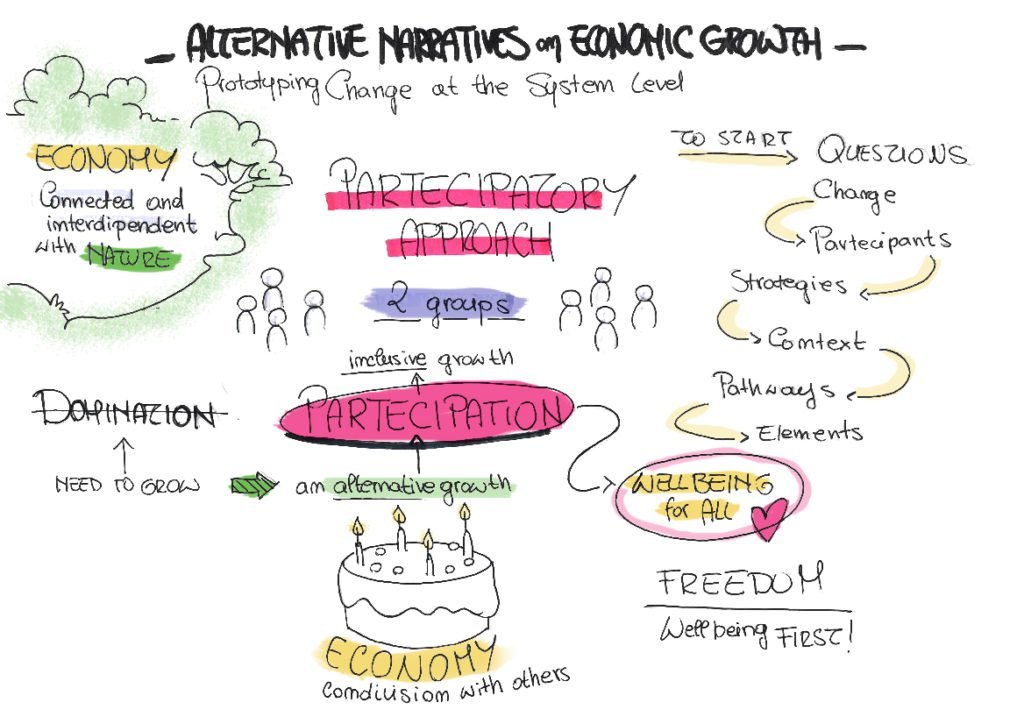