A Constructivist and Soft View of Systemic Design: A tribute to Jean Michel Larrasquet’s work

Several French authors have contributed to enlarge the knowledge on a soft and constructivist view of systemic thinking in the last decades.

The theory of complexity by Edgar Morin (2005) persisted to be the more complete and exhaustive critic of positivist approaches, underlying the need for embracing complexity, giving up on the necessity for absolute objectivism while opening a path exists between idealism and realism postures.

Morin, (1999) specially described the Complex thinking as a building with three different floors: Information, as well as cybernetics theories would be on the first floor. Second floor would be occupied by auto-organization and dissipative structure theories. The third floor would lodge three principles developed Edgar Morin: (1) The dialogic principle means that two contradictory principles are united not to overcome the contradiction but to consider the complexity of the tension that this contradiction provokes. (2) The recursion principle is based on a procreative loop, meaning that the subject is a product of the system and at the same time the system is created by subjects’ actions. Subjects do not only receive information from the system, they build a representation and creatively transform the system. (3) Finally, according to the hologrammatic principle, “the part is in the whole, but the whole is in the part”. For instance, society is composed by human beings but the society as a cultural construct is represented in each human being.

Based on this theory, Le Moigne (1994) and the cognitive science authors of enaction theories went beyond the bounded rationality (Simon, 1982), and introduced a new vision of thinking about systems warning designers that systems are interpretations (or cognitive construction) depending on the observer(s). For them, information and knowledge are not identical, as well as knowledge and action are not interdependent. “Knowledge” is an enaction of a system and a mind (Maturana et al., 1970) (not an accumulation of information) and an action that comes into new phenomenon (not a prerequisite for action) (Benasayag, 2006,). Knowledge is about modifying cognitive constructions to create clearness in experimentations and practices. A system cannot be known without acting and transforming it (Piaget, 1998) therefore design research and practices can be seen as means to operate research for action (Avenier et al., 2007).

In systemic design, soft-systemic approaches have been developed (Checkland, 2000) within a constructivist epistemology, considering models not as hard copies of the reality or representations that allow a prediction, but as intermediary objects (Jeantet, 1988) that will support design processes for building effective actions.

Numerous sociologists and designers also participated in the observation of complex processes of innovation and have been defending the importance of social dimension in such processes. For Alter (2002), innovation processes involve the co-evolution of systems, mental representations and relationships between stakeholders. With the Actor Network Theories, Akrich et al., (1988) proposed not only a frame to observe the co-evolution of processes of technical artifacts and social structures but also defined the notion of “translation” referring to the complexity of creating relationships when building innovating networks: stakeholders are constantly creating narratives that could create convergence or divergence between the diverse interests, enrol and disengage new actors.
Complexity, Constructivism, Enaction, Translation are key notions that institute the pillars of systemic thinking. Efforts are still needed to diffuse and embed them into actual organizational and design practices.

The French Bask author, Jean Michel Larrasquet (1950; 2018) was amongst the action-researchers applying complexity and systemic theories in his practices of activist, manager, prospective researcher and professor.

He was co-founder and president of the “Projectics” society for 20 years. Projectics is a community that question the complexity of human action within organizations through an annual conference and a revue that promote new and original angle on the topic, publishing articles in English, Spanish and French.

He also co-initiated a master of systemics from 2012 to 2015 proposed to managers. The training was composed by a 320 hours program, mixing plenary sessions and tutoring, based on 5 different modules introducing complex system management, systemic modelling, agile methodology, creativity and business model tools, inter-culturalism and soft systems approaches, open and sustainable management.

He was the president and an active member of the Bask Study Society “Eusko Ikaskuntza3”. This institution was created in 1918 to take up in a comprehensive and integrated way the social challenges of the Basque Country, considering its territorial specificities and going beyond the administrative, ideological and social obstacles. He was managing recent prospective works using design thinking tools to imagine and encourage reflections on strategic societal challenges like resource depletion, tradition and language preservation, health in different rural or semi-rural territories.

He co-created an original program of incubation for social innovative projects named ETICOOP4 in partnership with a major cooperative bank of the region, so project holders did not have to pay any fee for training and coaching. The program is supporting projects based on cooperative values, innovation and territory through common courses reaching 120 hours and 2 years of individual tutoring. Participants particularly enjoyed being challenging by external experts as well as their peers on key entrepreneurship themes like business modelling, financing plan, communication…

Through this contribution, authors would like to outline the contribution of French systemic thinkers that have not been systematically translated in English and therefore are rarely referred by the actual Systemic Design community. More especially, we want to give a special tribute to the legacy of Jean-Michel Larrasquet that has highly participated in supporting processes enhancing the adoption of a complexity and systemic thinking into design practices, for people, organizations or territories (Larrasquet, 2006; Larrasquet and Lizarralde, 2010; Larrasquet, 2012; Larrasquet et al., 2016; Lizarralde et al., 2011; Real et al., 2017). Specific highlights will be provided in the paper to disseminate the wisdom he acquires and transmits through his interrelated academic and practical works:

“Complex organizations are networks of people embedded in territories and cognitive’s processes constructing transitions with sense-making, ethics, care and emotions”.

A constructivist and soft view of systemic design. A tribute to Jean Michel Larrasquet’s work from RSD7 Symposium 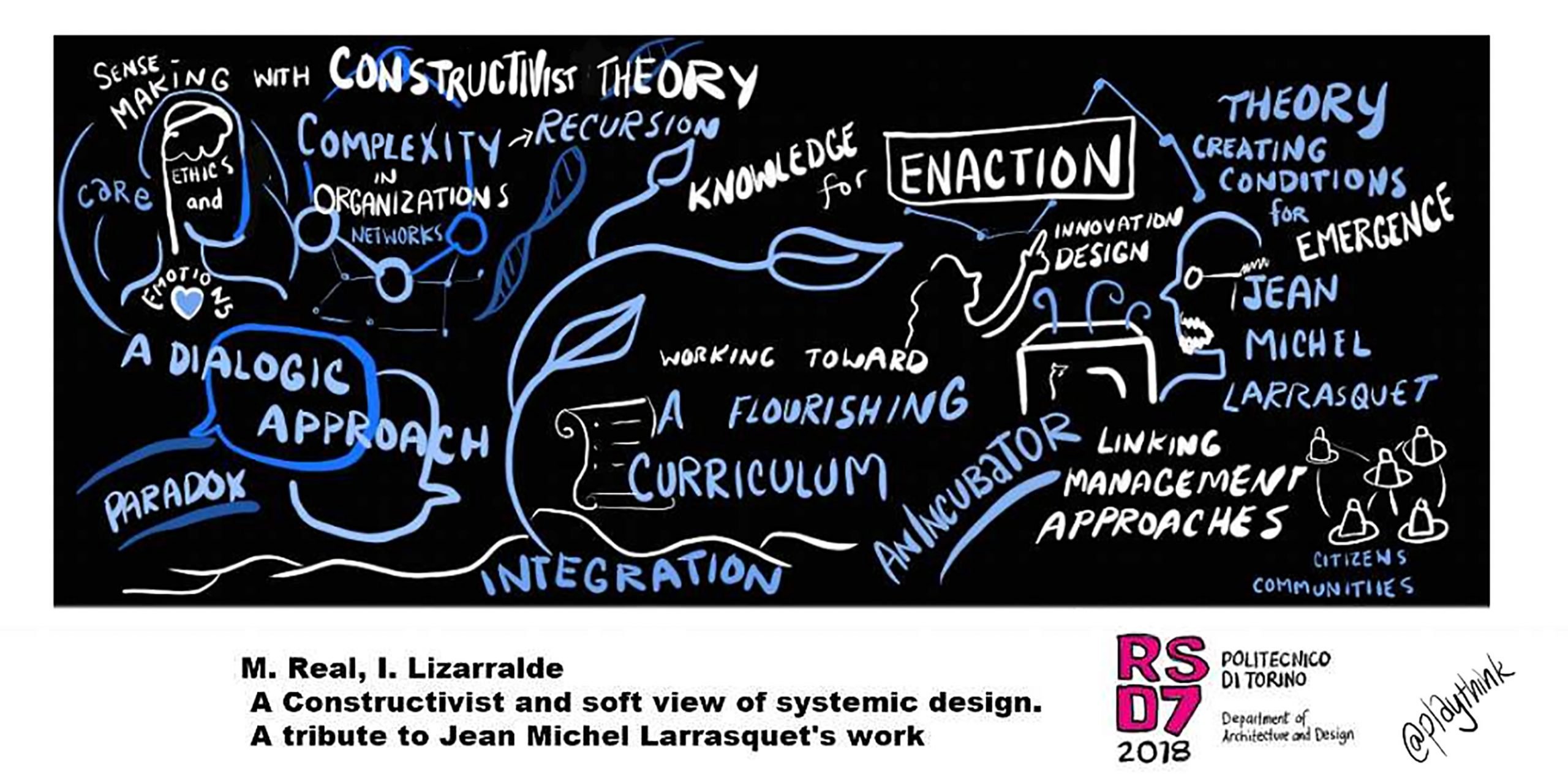